Senate Republicans Are Destroying Their Reputations To Protect Trump From Impeachment 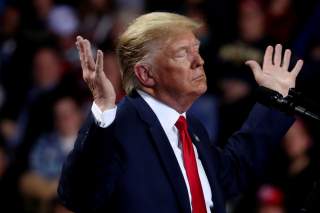 G. Gordon Liddy: now there was a man willing to take a bullet for his president! In his autobiography, Will, the former White House “Plumber” recounts the following conversation with White House counsel John Dean after the Watergate caper went bust:

Liddy: “If someone wants to shoot me, just tell me what corner to stand on and I’ll be there, OK?”

Liddy: “All right. But please remember what I said.”

President Trump’s copartisans in Congress may not be up for the literal Fifth‐​Avenue drive‐​by, but, metaphorically at least, they’ve embraced the Gordon Liddy Model of Impeachment Defense. Trump has but to say the word, and a distressingly large swathe of the GOP caucus will frogmarch their reputations to the appointed street corner for destruction.

December’s House debate is exhibit A; I covered some of the lowlights in the Hill last week: “The five dumbest things said about impeachment so far” (runners‐​up here). But before we get too far into the Senate trial, I want to look back at a key part of the House debate: the GOP’s “dissenting views” in the House Judiciary Committee Impeachment Report. It’s right there, starting on page 181, that you get a sense of just how far Republican standards have fallen.

It is entirely possible to make a solid case against Trump’s impeachment without beclowning oneself. But that case has to begin with an acknowledgment that Trump’s asking for an investigation — or the public announcement of one — into his leading 2020 rival, at least looks a little funny. What’s clear from the HJC Report is that the GOP dissenters didn’t dare dissent from the president’s self‐​assessment that his July 25 parley with President Zelensky was a “perfect call.”

Instead, Rep. Doug Collins, ranking Republican on the House Judiciary Committee insists there was “nothing untoward about a president asking a foreign government to investigate” the Bidens’ role in Ukraine. Trump was just trying to smoke out “potential corruption”; that the target happened to be his likely 2020 opponent was a happy accident, apparently. In his separate dissent, Rep. Mike Johnson (R‑LA) bellows in chain‐​email ALLCAPS: I’ll tell you “WHY THIS IMPEACHMENT IS A SHAM”! It’s because there’s “zero proof” that “President Trump was pursuing ‘personal benefit’” in the call: “To the contrary, the record is clear that he had exactly the opposite in mind.” But, as Conor Friedersdorf put the point a few weeks ago: “when a president says he is motivated by the public purpose of anti‐​corruption, but he only targets the guy polling best against him, AND pushes for the announcement of an investigation more than the thing itself, we should refrain from being credulous naifs.”

It’s instructive to compare the GOP dissents with the “Minority Views” filed in the Clinton and Nixon committee reports. The Democratic dissenters to the Clinton impeachment report managed to argue against removal without braying “READ THE [Grand Jury] TRANSCRIPT!” and insisting that Bubba was utterly without sin. Likewise, the Judiciary Committee Republicans who opposed Nixon’s impeachment never stooped to: “move along: nothing to see here!”

The closest parallel to the “abuse of power” charge against Trump (Article 1) can be found in the second article of impeachment against Nixon, passed by the House Judiciary Committee in July 1974 (remember, Nixon quit before the full House could vote). The first offense it enumerates is the president’s attempt to turn the IRS against his political rivals, principally staffers and contributors to Senator George McGovern’s presidential campaign.

Nothing wrong with asking for an investigation, right? Some of McGovern’s people probably were tax cheats, and you’ve got to start draining the swamp somewhere! Nobody at the time thought that passed the straight‐​face test, however. Notably, that included the 10 Republicans who voted against Nixon Article 2. In a lengthy dissenting opinion to the 1974 Judiciary Committee Report on “Impeachment of Richard M. Nixon,” they explain their reasons for rejecting the “Abuse of Power” charges. Unlike their 2019 counterparts, they managed to dissent with a modicum of dignity.

“Our opposition to the adoption of Article II should not be misunderstood as condonation of the presidential conduct alleged therein,” they write, “On the contrary, we deplore in strongest terms the aspects of presidential wrongdoing to which the Article is addressed.” Still, the Republican dissenters argue, the administration’s efforts to force political audits were “ineffectual,” ultimately unsuccessful, and the president’s direct involvement had not been conclusively proven. That said, the attempt to turn the IRS against McGovern supporters was “reprehensible,” they acknowledge, and concede that if the president supported that effort, he could have been subject to censure, if not impeachment. I don’t find the Nixon‐​era GOP’s arguments against Article 2 compelling. But at least the defense they mounted wasn’t embarrassingly servile.

“I need loyalty. I expect loyalty,” President Trump has said. On impeachment, that means not simply opposing removal, but Total Commitment — doing it his way. “Some G.O.P. lawmakers who initially said Mr. Trump’s phone call with the president of Ukraine was inappropriate later dropped their criticism,” having gotten the message that it wouldn’t be prudent. “Profiles in Courage” are vanishingly rare in the upper chamber; but can’t Senate Republicans do better than this?

This article by Gene Healy first appeared at the Cato Institute.