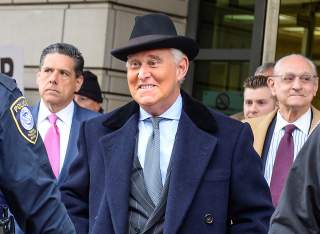 On Feb. 10, prosecutors in the U.S. Attorney’s Office in Washington recommended that Stone serve between 87 months and 108 months in jail for his crimes. President Donald Trump responded hours later, saying the recommendation was “disgraceful” and a “miscarriage of justice.”

The Justice Department signaled through statements to the media that officials at headquarters were also unhappy with the recommendation and that the government would be revising its court filing to lower the proposed sentence.

Four prosecutors withdrew from Stone’s case in protest over the revision.

In a filing Feb. 11, the U.S. Attorney’s Office recommended that Stone face “substantial” jail time, but a sentence that was “far less” than what was initially recommended.

Attorney General William Barr said in an interview Feb. 13 that he did not speak with Trump about Stone’s case, and that he independently believed that the Trump ally’s sentence was “very excessive.”

The main difference between the two recommendations hinged on how much additional jail time prosecutors wanted to give Stone for a series of text messages that he sent in 2018 to his longtime associate, Randy Credico.

Prosecutors alleged at Stone’s trial that he threatened Credico in order to prevent him from cooperating with the House Intelligence Committee’s Russia investigation.

Stone had asserted to the committee and publicly that Credico was a source of information for him regarding WikiLeaks’ activities in 2016. Credico, a left-wing comedian and radio show host, vehemently denied it.

During a heated text message exchange on April 9, 2018, Stone wrote to Credico, “Prepare to die, cocksucker.” He also told Credico that he would “take that dog from you,” a reference to Credico’s service dog.

Based on federal sentencing guidelines, characterizing Stone’s messages as a physical threat would add as much as five years to his prison sentence. In their revising sentencing recommendation, prosecutors noted that Credico testified that he never felt in physical danger from Stone’s text messages. Credico also wrote a letter to Judge Jackson on Jan. 20 asking her to spare Stone of jail time.

Image: Former Trump campaign adviser Roger Stone departs after he was sentenced to three years and four months in prison for charges that include lying to Congress, obstruction of justiceand witness tampering, at U.S. District Court in Washington, U.S., February 20, 2020. REUTERS/Mary F. Calvert