Septuagenarian Bernie Sanders to Joe Biden: You Don't Have the 'Energy and Enthusiasm' to Beat Trump 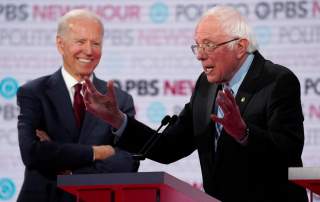 “What is imperative is that we defeat Trump, the most dangerous president in modern history,” Sanders said in an interview with CNN’s Anderson Cooper.

“Joe Biden voted and helped lead the effort for the war in Iraq, the most dangerous foreign policy blunder in the modern history of this country,” said Sanders.

“So if we’re going to beat Trump, we need turnout,” he continued. “And to get turnout, you need energy and excitement. And I don’t think that that kind of record is going to bring forth the energy we need to defeat Trump.”

Biden leads a crowded Democratic field in most national polls, while Sanders leads in both Iowa and New Hampshire.

According to a hypothetical poll released last month by Quinnipiac, both Sanders and Biden would beat Trump in a head-to-head match up. The poll had Biden defeating Trump 51-42, and Sanders beating the Republican 51-43 in the hypothetical match-up.