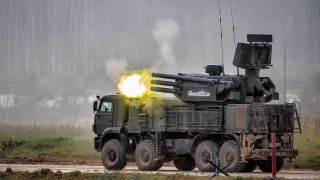 “We have received the Kornets [anti-tank missile systems]. We have received tanks, armored personnel carriers and are purchasing new Pantsyrs,” Serbian interior minister Aleksandar Vulin said on Thursday during talks with Russian defense minister Sergey Shoigu. “All that we have agreed upon with you is being implemented,” added Vulin, addressing Shoigu.

Serbia bought six Russian Pantsir S1 air defense systems in 2019, receiving the first batch of these systems in 2020. “Purchasing this defensive weapons [sic], one-of-its-kind in the region, Serbia continues to strengthen its defense might and deterrence potential. This way we enhance our capability to remain a military neutral state, which is the fundamental security position of the Serbian Army Supreme Commander-in-Chief Aleksandar Vucic, as well as of our government and parliament,” according to a Serbian Defense Ministry statement issued at the time.

Serbia’s latest import contract is for improved Pantsir S1M systems, which offer the ability to launch new hypersonic surface-to-air missiles with a greater effective operating range of thirty kilometers, up from the twenty kilometers of its predecessor. The Pantsir S1M comes with a more robust countermeasures package, featuring added anti-jamming protection. The system, which was unveiled in 2019, was designed to reflect the experience of Russia’s armed forces over the course of Moscow’s intervention into the Syrian Civil War.

According to Deputy General Director of the High-Precision Complexes holding Sergey Mikhailov, the Pantsir S1M is an especially effective tool to counteract drone technology. “Countering drones is one of the most urgent tasks facing modern air defense systems,” Mikhailov said. “Currently, the Russian industry produces two types of anti-UAVS—soft-kill, involving electronic suppression, and hard-kill, involving physical destruction. The network combining both types of systems was first presented at the IDEX 2021 exhibition, and the Pantsir-S1M will become one of its key components, in particular the group of means of physical destruction of UAVs.” Serbia has been a frequent customer of heavy Russian military hardware, purchasing 30 T-72MS and over two dozen BRDM-2MS armored personnel carriers in recent years. The Balkan country is due to receive its first shipment of Kornet anti-tank guided missiles (ATGM’s) by the end of 2021.