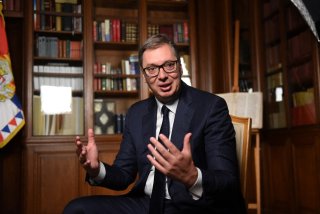 Serbian president Aleksandar Vucic claimed on Monday that Russia and the European Union (EU) were engaged in a political and cultural “proxy” conflict within Serbia and defended his country’s decision to seek cooperation with both sides, even as tensions between Brussels and Moscow continue to escalate over the ongoing war in Ukraine.

Vucic’s remarks came one day after conservative and right-wing Serbians launched a march protesting the upcoming annual EuroPride gay pride march in Belgrade, Serbia’s capital. During the anti-pride protest, many attendees carried Russian flags and posters of Russian leader Vladimir Putin—underscoring the political connection between Russia and right-wing movements in Europe, which have often praised Putin in the past for protecting “traditional values” through legal discrimination against Russia’s LGBT community. Although Vucic announced the pride parade’s cancellation over the weekend, organizers vowed to hold the event anyway, setting the stage for a confrontation during the scheduled event in mid-September.

Vucic did not claim that the confrontation had been planned by Brussels or Moscow, but argued that the pattern of social division reflected in the march had been generally encouraged by the two sides.

“I cannot say that it was a proxy attack, because there were many ordinary people there,” he said. “But whether there is a proxy conflict in Serbia…there is one, no doubt about that, [between] East and West.”

Serbia’s status within Europe has remained contentious since the 1990s when Serbian leader Slobodan Milosevic was widely blamed for abetting ethnic violence between Serbs and non-Serbs in neighboring Croatia and Bosnia. Following Milosevic’s overthrow amid mass protests in 2000, Serbia committed to joining the European Union and received candidate status in 2012 but has retained cordial ties with Russia and China. At the same time, it has cooperated with NATO and purchased military equipment from NATO nations, although Russia remains its primary source of weapons.

Unlike most of Europe, Serbia has remained largely neutral during Russia’s invasion of Ukraine. Although Belgrade voted in favor of a United Nations General Assembly resolution condemning Moscow at the outset of the conflict, it has refused to participate in international sanctions against the Kremlin and has continued large-scale gas purchases from Russia.

Russia also supports Serbia’s position on Kosovo, the former Serbian province that seceded in 1999 and formally declared its independence in 2008. The Kosovo issue has divided Belgrade and Brussels, and EU officials have condemned repeated Serbian attempts to encourage separatism among Kosovar Serbs—most recently in late July and early August when it encouraged ethnic Serbs in northern Kosovo to protest against a government decision to no longer accept Serbian-issued license plates or identity documents for its citizens.

Vucic added in his remarks that he did not think that the Kosovar government in Pristina, which Serbia does not recognize, intended to have “a serious conversation or a serious dialogue” with Belgrade, instead preferring to achieve its aims by appealing to the West.

“I trust that those countries which are…protecting the so-called independence of Kosovo…will convince [the government] not to play [with] a conflict in the region, which is certainly full of problems,” he said.