Ship-to-Shore Connectors Are Key to the Navy's New Doctrine 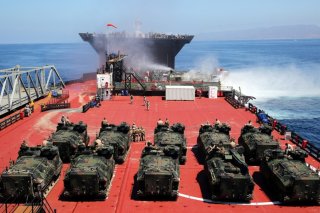 The U.S. Navy is making progress in its efforts to produce a new fleet of Ship-to-Shore Connectors (SSC) capable of transporting Marines, weapons, and vehicles for amphibious attacks.

Textron Systems’ new SSCs are intended to build on the decades-old Landing Craft Air Cushion (LCAC) ocean transport program. When it absorbs the LCAC’s role, the more capable SSC will also introduce a sphere of new technologies. The Navy has been testing the new SSCs and plans to deliver a large number of them for operational service in the coming years.

The new SSC incorporates a number of new performance-enhancing innovations, including a powerful Rolls Royce engine, durable composite materials, and an unprecedented payload capacity that is sufficient to transport seventy-four-ton Abrams tanks to shore.

The program is designed to fully support the Navy’s Distributed Maritime Operations strategy. The strategy calls for a more dispersed and securely networked fleet in order to destroy targets from less vulnerable stand-off positions. As tanks have historically needed to be transported in large numbers by boat, the ability to bring tanks directly to the shore on an amphibious assault vehicle introduces a significant new combat advantage. In addition, the ability to reinforce ground forces with heavy armor will increase tactical options for commanders.

As part of the developmental process, Textron and Navy engineers have made a few adjustments to the SSCs to ensure that they are combat-ready upon arrival. The modifications, Navy program managers say, involve strengthening the blade design and upgrading the software. The fixes were implemented to strengthen some of the composite materials and ensure the blade’s structural integrity.

“Both of those fixes were implemented and tested, as Panama City proved out in 2020, and they will be [placed] into all the craft going forward. So, the changes have been delivered and tested,” Capt. Scot Searles told an audience at the 2022 Surface Navy Symposium.

Searles explained that the fixes were successfully tested during recent acceptance trials.

“We did not see any issues at all, so we believe we have retired this issue with these two fixes. All the future craft will have all these fixes implemented at delivery,” he said.