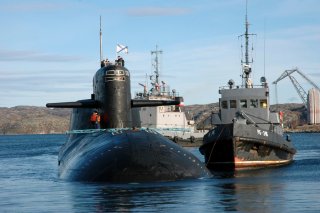 One of the most devastating Soviet innovations in torpedo technology, supercavitating torpedoes are orders of magnitude faster than their conventional counterparts.

On the heels of U.S. strides in nuclear propulsion technology toward the 1960s, the Soviet Navy found itself in need of reliable countermeasures against U.S. nuclear submarines that could feasibly threaten the integrity of the USSR’s sea-based nuclear deterrent. One solution came in the form of new submarine-based weapons. VA-111 Shkval is a supercavitating torpedo that entered service in 1977, though the weapon remained walled off from public knowledge until after the Soviet collapse.

Torpedoes typically use propellers or pumpjets, two conventional means of propulsion that rarely ever see speeds in excess of 60 knots. Shkval, however, is built with a solid-fuel rocket engine, enabling a maximum speed of over 200 knots or 370 kilometers per hour. The key to this process stems from the phenomenon of supercavitation: gas ejected from the torpedo’s nose creates a kind of thin gas bubble that minimizes contact with water and generally prevents the performance degradation caused by drag. As the torpedo moves along its trajectory toward its target, the gas bubble continues to vaporize the water around it. Fired from standard 533-millimeter torpedo tubes, Shkval ejects at a conventional speed of around 50 knots and proceeds to accelerate to supercavitating speeds. The original Shkval was intended to solely carry a nuclear warhead—later models are compatible with nuclear and conventional warheads alike.

Rather ingeniously designed, supercavitating torpedoes do suffer from some obvious performance drawbacks. For one, the propulsion process generates an immense amount of noise. This means that the Shkval-equipped submarine will become easily detectable as soon as it fires, although that is counterbalanced to some degree by the fact that the torpedo’s sheer speed can leave little room for countermeasures if used in the right scenario. The bigger problem is that the torpedo is so noisy that it deafens itself at maximum supercavitating speeds, making sonar guidance impossible. There are a few rumored workarounds to mitigate or eliminate this problem on newer Shkval models, including the possible use of thrust-vectoring, but nothing has been confirmed. There is a second major problem: the torpedo must be kept inside the gas bubble at all times to avoid a sudden burst of drag and potential malfunctions, significantly limiting the weapon’s maneuverability—that, again, is a compromise Soviet engineers were willing to make in exchange for Shkval’s blistering speed.

Supercavitating torpedo technology faces an uncertain future in the post- Cold War period. German manufacturer Diehl-BGT worked on a hybrid, surface-submarine launched supercavitating weapon in the early 2000s, but the project apparently did not make it past the prototype stage. More recently, it was revealed that Russia is working on the Khishchnik (“Raptor”) supercavitating torpedo to replace Shkval. Much like Shkval, the program has been kept tightly under wraps. It is unknown how far along the Khishchnik project is in the research and production phase, nor is it clear which Russian submarines are intended to carry the prospective new torpedo.