Like Shotguns? You Have To Try Out These Semi-Automatic Beasts 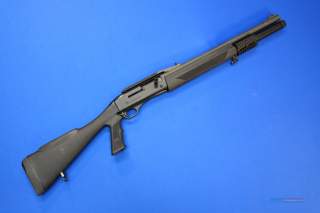 This is a great gift for a gun lover and also makes one of those timeless pieces that you can keep in your family for years.

BEST SEMI-AUTO SHOTGUN FOR SELF DEFENSE

Right off the bat I’ll mention that I’m not a fan of traditional shotguns for home defense.

The reasons are simple. They fire slower and have a higher possibility of jamming which is not something you can afford in a home invasion.

We all know that in self defense situations reaction time is vital. Even a few seconds can mean the difference between life and death.  Using a traditional shotgun isn’t something you can really afford when the stakes are that high.

Beretta has been making quality pistols for a long time. They are one of the world’s top gun manufacturers.  The 1301 Tactical is no exception to that.

It is a gas powered 12 gauge semi-auto that fires extremely powerful and slightly reduced loads. The 1301 Tactical is one of the most recommended and used tactical auto shotguns out there. It’s a favorite of tactical teams and special forces units worldwide.

I wouldn’t recommend this as a shotgun for shooting competitions — the slightly more expensive variant, the 1301 Comp, is the better choice for that purpose. However, if personal defense or home protection is what you’re concerned about, then the 1301 is a VERY good choice.

Another great choice for home defense. I didn’t put this as number one just because I’m biased towards the Beretta 1301, (which superseded the TX4 that I’ve had for a few years).

The Mossberg is like a Ford 150 – functional, reliable and easy to use. There is nothing fancy about it but it’s pretty cheap considering the build.

It’s built specifically for military units so its design allows for a lot of damage. It still has the same autoloading functionality as all the other semi-auto shotguns. The FNH is also the recipient of the Shotgun of the Year Award.

I got one of these three years ago as a Christmas present from my wife. I’ve never looked back since and I recommend it to anyone looking to spend a bit more money on a VERY solid and reliable semi-automatic shotgun for home defense.

The M4 is the top pick for the US Marine’s special forces units. The M4 is also not inertia operated rather it runs on a gas powered system.

Since the M4 is so well designed it rarely gets jammed and requires a lot less cleaning than some of its cheapest counterparts. It comes with a platform to add an adjustable scope and works well with a few different models of gun slings.

If you’re looking for the top notch, king of all shotguns than the M4 Benelli is your choice. Only downside is the price.

WHAT ARE THE BEST SHOTGUNS FOR COMPETITION?

Anyone who has been skeet shooting knows that using a semi-automatic shotgun is a lot more fun than a pump action piece.

Faster shots equal a lot higher chance to hit your target and avoid dealing with jams.

It’s a 12 gauge auto-loader that was built with competition in mind. This is a great choice for 3-gun shooting comps.

The Versaport system handles gas pressure and modifies pressure based on the size of the shotgun shell. The idea behind the Versaport was that shooters should be able to have recoil that is consistent and not affected by the load.

Priced a little higher than some of the other models. It’s a great choice for anyone who is serious about competitive shooting and wants a shotgun that they can use reliably for the next twenty years.

This one is no exception to the rule. It comes in a few different designs: Standard, Pistol Grip and specially designed and patented ComforTech which reduces recoil by a massive degree allowing for enhanced control.

I won’t pigeonhole the M2 and say it’s only good for competitive shooting. It’s a great choice for hunting, self defense and competition.

Since the days of the Browning A5, the semi-auto shotgun has come a long way. Originally produced as military weapon, it has now transitioned into competitive shooting and self defense.

The biggest advantage of the semi-auto shotgun is that it’s just easier to use. While shotgun “purists” swear by the reliability, simplicity and aesthetics of the classic pump-action shotgun, and given enough time in the range it can be fired as fast as any semi-auto, the features of semi-autos make it the better choice for novice users.

Semi-auto shotguns don’t kick as hard. You’ll avoid the huge recoil that you get with a regular shotgun. Less recoil equates to a marked improvement in your ability to aim and shoot your boomstick.

I would recommend any of the shotguns we discussed for new shooters, people looking for tactical firearms for home defense or competitive shooters.