Should America Push For Ukraine To Join NATO? 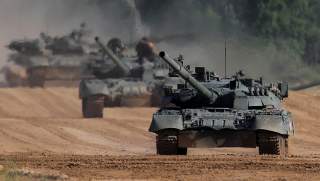 Key point: This has long been one of Russia's greatest fears.

Ukraine’s Prime Minister announced earlier this week that NATO and the Ukrainian Armed Forces will hold joint military exercises in the Black Sea region, the latest in Kiev’s ongoing effort to secure membership in the Transatlantic Alliance through a strategy of consistent participation in NATO projects.

Operation Coherent Resilience 2020 will be held in Ukraine’s southern port city of Odesa on October 5-9, 2020, according to an agreement signed by Vice Prime Minister for European and Euro-Atlantic Integration of Ukraine Dmytro Kuleba and NATO Assistant Secretary-General for Political Affairs and Security Policy Bettina Cadenbach. Over the course of the exercises, over 200 experts will develop contingency plans for potential crisis situations in the Black Sea region: "The goal is to provide a smooth, timely, and competent response to cyber attacks, attacks on ports, seizure of transport routes and other threats," according to a Ukrainian press statement issued yesterday.

Coherent Resilience 2020 is far from the first of its kind; in 2019, Ukraine has participated in a flurry of NATO exercises and military planning sessions.

The upcoming joint exercise, and others like it, is part of what Kuleba sees as a concerted strategy to position Ukraine as an indispensable NATO partner: “we integrate Ukraine in as many fields and markets when it comes to the EU, or fields of cooperation with NATO, as possible, so one day the guys in Brussels in NATO and EU look around and say: ‘Oh, these Ukrainians are already everywhere, so why shouldn’t we make this next step?’ And that’s what we’ve been doing in the last three months,” he said last month at the German Marshall Fund. NATO accession has been written into the Ukrainian constitution-- at least, pending an upcoming referendum promised by President Volodymyr Zelensky-- since February 2019, and continues to command the support of certain Washington D.C. foreign policy experts.

Still, the Zelensky administration continues to face major hurdles in its quest for NATO accession. In an article recently written for The National Interest, Vice President and Director of Studies at the Center for the National Interest George Beebe compellingly highlights a lack of appetite for Ukraine’s NATO membership among west European partners who fear adding fuel to the fire of potential military escalation in the ongoing Donbass war. Whereas the assurance of Ukrainian NATO membership is sometimes framed as a deterrent against further conflict with Russia, Beebe cites the 2008 Russo-Georgian War to warn that it could have the exact opposite effect by sending dangerous military signals to Kiev amid the Ukrainian Army’s ongoing effort to retake the Russian-backed separatist territories of Donetsk and Luhansk.

There are ongoing concerns that membership would allow Ukraine to immediately invoke Article 5 of the NATO treaty, the stipulation that an armed attack against one member state is an attack against them all. As it stands, the Atlantic Alliance can be said to enjoy the best of both worlds by cooperating with Ukraine on a wide variety of military matters, but without committing to the security guarantees associated with formal membership.

Popular support for NATO accession among Ukrainians has seen a steep decline, down from 69 percent at its peak in 2017 to around 51 percent in recent months. Though it remains to be seen if Ukraine’s political establishment will follow suit, there are early signs of a newfound pragmatism by some Kiev elites.

“They are not waiting for us in NATO,” head of the Ukrainian Parliament’s Committee on State Security Irina Vereshchuk told reporters, urging the government to instead explore a neutrality doctrine on the example of Finland.