Should the Army Be Using This Kind of Sig Sauer Training Ammo? 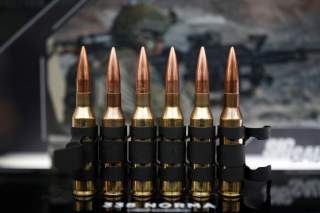 Key point: If trainings are meant to simulate real-life battles, they shouldn't be using ammo that feels different.

A common pitfall in the world of pistol shooting is training with low-quality, low-cost training ammunition but using higher power pistol ammo in real-world situations. This can lead to situations where firing a gun in anger could have a very different feel than firing during training. Following the release of a commercial version of the Army’s new M17 handgun, manufacturer Sig Sauer is now releasing a line of ammunition and training ammunition with the same performance characteristics—including recoil—ensuring that Army handgun shooters will fight the way they train.

In much of the shooting world, the difference between training ammunition and ammunition meant to be used in emergencies can be pretty significant. Inexpensive training or “plinking” ammo is often chosen when purchasing ammunition in bulk. These ammunition types often use smaller amounts of more inexpensive gunpowder, resulting in poorer ballistic performance and less recoil.

While inexpensive training ammunition is an economical and logical choice for many, it does have one major downside. If the difference in ammunition power and performance between training and “ready” ammunition is considerable, it could lead to a false sense of how a firearm will perform in emergencies. A shooter proficient in shooting low recoil training ammunition could be in for a big surprise when shooting more powerful ammo during an actual shootout, leading to misses and a loss of confidence.

In January 2017, Sig Sauer won the contract for the U.S. Army’s M17 Modular Handgun System. Designed to replace the 1980s-era Beretta M9 handgun, the M17 will eventually replace the M9 across all of the armed services. In addition to the M17, the Army is also introducing a new high pressure “+P” ammunition designed to generate higher muzzle energy and give the M17 greater ability to kill or incapacitate enemies.

Most U.S. military personnel only occasionally fire their issue handguns, and thus it is important they have a realistic expectation of what it feels like to fire the M17. Rather than buy cheaper, low-power training ammunition for the M17 and then issue more powerful ammo during wartime, the U.S. Military is pairing the new handgun with training ammunition ballistically matched to its wartime or contingency ammo.

The result: the recoil kick and impulse soldiers, sailors, Marines, airmen, and Coast Guardsmen will feel during training will be identical to that of wartime ammunition. The Sig Sauer M17 124 grain, +P full metal jacket training ammunition produces the same muzzle energy as the M17 124 grain 9mm +P V-Crown ammunition (395-foot pounds at the muzzle). The latter ammunition is a hollow point round for greater expansion inside soft tissue, resulting in faster incapacitation of the target. The V-Crown round is also designed to transfer as much energy as possible to the target.

Both the FMJ and V-Crown ammunition are being released to the public and are particularly of interest to those that have the civilian version of the M17, the P320-M17. The P320-M17 is practically identical to the military issue version. The ammunition could be used in any 9-millimeter Luger or Parabellum handgun rated for use with high pressure +P ammunition. Caution should be exercised however as some 9-millimeter handguns are not rated to withstand repeated +P handgun use.

Despite the close match in ballistic performance between the rounds, training ammunition is still relatively inexpensive, coming in at $18.95 for fifty rounds, or .38 cents per round. The V-Crown duty ammunition retails for $20.95 for twenty rounds, or just over a dollar a round.

The U.S. Military has long endorsed the concept of “training the way you fight” in order to minimize the effects of the unexpected on the battlefield. This maxim of war now extends all the way to pistol ammunition. It’s also something that civilian shooters who train for the one day their lives may depend on handgun proficiency and accuracy should take to heart.

Kyle Mizokami is a writer based in San Francisco who has appeared in The Diplomat, Foreign Policy, War is Boring and The Daily Beast. In 2009 he co-founded the defense and security blog Japan Security Watch. This first appeared in December 2018.