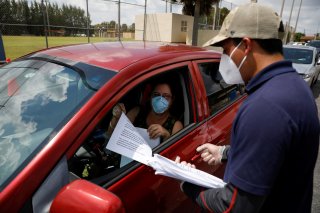 As the scale of impending layoffs caused by government-mandated shutdowns became clearer, Congress acted quickly to “keep as many workers as whole as possible through the emergency” by adding $600 to weekly state unemployment insurance (UI) checks. Federal funds pay for this supplement to state UI benefits. But that hasn’t stopped the finances of state UI programs from deteriorating rapidly — indeed, the nonpartisan Congressional Budget Office recently reported the federal supplements will encourage UI takeup and cause state trust funds to drain even faster. That will add to already massive future payroll tax hikes needed to cover soaring state UI benefit costs. That raises the question: Should Congress also “make whole” state UI trust funds being rapidly drained by shutdown-induced layoffs?

To arrive at an answer, it is important to understand how UI is financed. Each state maintains its own UI trust fund, which reflects the balance between state payroll taxes and the benefits they support, which average about $370 per week nationwide. When times are good, unemployment claims fall and payrolls rise, contributing to positive balances that can be drawn down in recessions. In 2019, states collected around $35 billion in payroll taxes and paid $27 billion in UI benefits. The aggregate balance of state trust funds was $75 billion in December 2019, and 31 states had balances that the Department of Labor considered sufficient to weather a typical recession for one year.

But this is no typical recession, with an unprecedented 26 million people filing initial unemployment claims in the past five weeks. In the week ending March 28, seven states (California, Florida, Michigan, New York, Ohio, Pennsylvania, and Texas) had more initial claims than the pre-crisis level (211,000) nationwide. California, New York, Texas, Massachusetts, and Ohio were also among states with the lowest trust fund balances before the crisis began, meaning they will be among the first to deplete their trust funds. As a recent Wall Street Journal article reported, New York already “has applied for an up to $4 billion, no-interest federal loan,” permitting it to keep paying promised benefits even after their trust fund is exhausted. That makes New York the first — but certainly not the last — state to resort to this emergency measure to continue paying promised UI benefits.

But just because states have access to interest-free federal loans doesn’t mean paying the principle back is cost-free. After all, state UI benefit costs are supported by payroll taxes paid by employers. Some taxes are experience-rated, meaning employers that conduct layoffs see their tax rates automatically rise. Other taxes are “socialized” across all employers, such as when trust fund solvency falls. As federal loan payments come due and experience rating and trust fund solvency taxes kick in, state payroll taxes will rise sharply — some as soon as next January and continuing for years ahead.

Just how high will the price be? It’s impossible to say right now. But extrapolating from the recent CBO score of the $2 trillion CARES Act suggests the extraordinary cost of state UI benefits paid through just July could exceed the entire $75 billion balance in states’ UI trust funds at the start of this year. For example, paying UI to the 26 million recent initial claimants through July would cost upwards of $140 billion — four times last year’s state payroll tax collections.

Which brings us back to where we started. As the Center on Budget and Policy Priorities notes, “most economists agree that employees bear the true cost of employer payroll taxes in the form of lower wages.” If Congress rightly protected laid off workers from losing income now due to government-mandated shutdowns, shouldn’t it be equally concerned about preventing higher payroll taxes and lower wages in the years ahead that are the direct result of today’s surge in UI benefit payments? Aren’t tomorrow’s workers just as blameless as today’s — and as worthy of protection from economic harm resulting from government-mandated shutdowns?

So far, Congress has been largely silent on that question, aside from encouraging states to spread the coming tax hikes across all employers, instead of just those conducting layoffs. But even if states follow through on that direction, that would simply spread the pain, not eliminate it — both for employers forced to pay sharply higher payroll taxes as well as workers experiencing lower wages as a result. Federal lawmakers looking to provide additional state aid would do well to consider alleviating these costs already imposed by federal policy and government-mandated shutdowns, which otherwise will result in lower job creation and wages in the years ahead.