Should the Navy Have More Frigates and Fewer Destroyers? 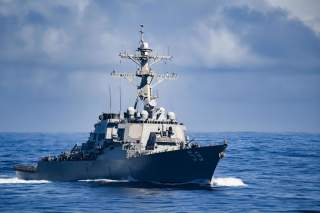 Key point: Fewer large ships would save the Navy money, but are smaller vessels just as good? The Pentagon will have to sort out how to balance its funding and its need for firepower.

The U.S. Navy might tweak its force-structure goals in order to boost the number of frigates.

That's what Vice Adm. Bill Merz, the deputy chief of naval operations, told a House of Representatives subcommittee on March 27, 2019. "We’re expecting a pretty hard look at the mix of ships this year," Merz said, according to USNI News.

In rewriting the force-structure plan to include more small surface combatants, the Navy could signal its intention to acquire larger numbers of smaller ships at the expense of bigger ships.

The idea would be to distribute U.S. naval power across a greater number of less-expensive vessels, reversing a decades-long trend toward larger, and fewer U.S. warships.

"We know we are heavy on large surface combatants, and we’d like to adjust that to a more appropriate mix, especially with the lethality we’re seeing coming along with the frigate," Merz said.

The Navy's released its last force-structure plan in late 2016. That plan, which called for a fleet of 355 major warships, up from the 289 ships the Navy possessed in early 2019. The new, bigger fleet would include 104 large surface combatants such as destroyers and cruisers and 52 small surface combatants including Littoral Combat Ships and frigates.

But the Navy is struggling to afford the 355-ship fleet. The 2020 edition of the Navy's 30-year shipbuilding plan projects the fleet could grow to 355 ships by 2034. But the Congressional Budget Office estimated that just buying all the new vessels would cost $27 billion per year, roughly double what the Navy historically has spent.

Reducing the number of large warships and adding frigates could help to reduce the cost of a larger fleet. A 9,000-ton-displacement Arleigh Burke-class destroyer costs more than $2 billion. A frigate, displacing just 5,000 tons, should cost around $1 billion, according to the Navy.

But the frigate still could carry many of the same weapons and sensors that a destroyer does, although somewhat fewer of them.

According to a Navy document that the Congressional Research Service obtained, the frigate will come armed with a 57-millimeter gun, a 32-cell vertical missile-launcher for SM-2 Block IIIC and Evolved Sea Sparrow missiles, a 21-round point-defense Rolling Airframe Missile launcher and eight launchers for over-the-horizon anti-ship missiles.

Its radar and combat system will be a smaller version of the Aegis system that equips the Navy's destroyers and cruisers. The frigate will embark an MH-60R helicopter and an MQ-8C drone. That weapons and sensor suite should give the frigate the ability to engage enemy aircraft, ships and submarines at a distance of 100 miles or more.

The new frigate also could function as a command vessel for robotic vessels, using Link 11 and Link 16 data links, satellite communications and Network Tactical Common Data Link to help the unmanned vessels to navigate and also to authorize them to fire weapons.

The Navy soon could select a shipyard to build the new class of frigate starting in 2020. "All shipyards have agreed that they can give us the lethality we need," Merz said.

The old fleet plan called for 20 of the vessels. A new plan could boost that number.