Should the U.S. Be Worried About a Chinese Naval Base in Cambodia? 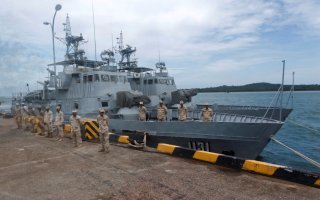 Reports have emerged that Chinese officials have been secretly working to construct a permanent military facility at Ream Naval Base in Cambodia on the Gulf of Thailand. If true, this project would become China’s second overseas military installation after the Port of Doraleh in Djibouti and would be a watershed moment for Indo-Pacific geopolitics.

Does the Ream facility pose a threat to the United States and its allies? At a ground-breaking ceremony last week attended by Cambodian and Chinese officials, Cambodian defense minister Tea Banh denied claims that China would be granted exclusive use of the facility, stating plainly that Ream “cannot be a port that would threaten any countries.” Indeed, Cambodia’s constitution forbids any foreign bases from being located within the country, which would be enough of an assurance in a different country with stronger institutions and a respect for the rule of law. But Cambodian president Hun Sen has a knack for employing extra-constitutional measures—including using the country’s Supreme Court to oust his political opposition and create an unaccountable one-party autocracy—and Cambodia ranks 138 out of 139 on the World Justice Project’s 2021 Rule of Law Index.

What about any Chinese claims to peace? Here too, the United States should treat any denials or promises with a grain of salt. When reports first emerged in 2019 that China had been granted exclusive access to Ream’s northern section, officials within the Chinese Defense Ministry decried these “rumors” as fake news and insisted that China’s role in Cambodia was only to provide “military training and logistical equipment.” These denials were proven false this week when a Chinese official confirmed that the People’s Liberation Army Navy (PLAN) would, in fact, be using the aforementioned northern section. The truth is that the Chinese Communist Party has a long history of lying about its intentions in the Indo-Pacific, none so blatant as in 2015 when President Xi Jinping promised President Barack Obama in the White House Rose Garden that he would not militarize the South China Sea. Today, at least three man-made islands in the region are armed with Chinese fighter jets and area denial weapon systems. If the United States permits this incremental buildup in Cambodia, how much longer will it be before China has a full-fledged base capable of deploying ships on short notice throughout the Gulf of Thailand and the South Pacific? The level of secrecy behind Ream’s expansion—going so far as to disguise Chinese officials during state visits to the site and to publicize pictures of the base with no mention of the northern expansion, despite satellite imagery to the contrary—makes it plainly obvious that the base will not serve a peaceful purpose, and that China will have exclusive or quasi-exclusive access to its use.

To be fair, there are legitimate grounds to believe that a Chinese base in Cambodia is not all that detrimental to American interests in the Indo-Pacific, even if the base hosts naval equipment. The locations of China’s growing network of overseas ports track closely with its Critical Sea Lines of Communication, otherwise known as the String of Pearls. This trend of placing facilities along the maritime route from the Chinese mainland to Port Sudan in the Horn of Africa has become a Rorschach test for defense analysts. Some countries, as a 2013 article from The Economist noted, view this simply as China securing its supply lines of crude oil and other imports while skeptics like India perceive it as an attempt to hamstring the power projection and the trading capacity of the Quad countries. Which interpretation is correct has important implications for U.S. diplomats, whose negotiations will depend on whether the Ream base is simply for supply chain security or for a more nefarious purpose.

Or maybe an accurate assessment of the intent behind the base’s construction does not matter at all. Some analysts have pointed out that the Ream Naval Base would not be of much use in a conflict involving Chinese territory. Satellite imagery of the pier construction and land dredging along China’s alleged portion of the base reveals that Ream has the capacity to support, at best, nothing larger than mid-sized vessels. This is similar to Singapore’s capacity to host U.S. Navy littoral combat ships which by themselves are hardly decisive for the military balance in the region. Ream does offer direct access to the Gulf of Thailand but that serves little purpose since Chinese shipping routes pass much further to the south once transiting the Strait of Malacca. Furthermore, in the event of military confrontation over Hong Kong or Taiwan, Chinese bases in Hainan are much better positioned to respond to emerging threats than a base in Cambodia, which risks interdiction from southern Vietnam and the Malay Peninsula.

All of this is to say that there are a number of questions that need to be addressed before the United States can determine an appropriate response. American diplomats should work with Cambodian officials to increase transparency regarding the base’s construction, perhaps even coming to an agreement allowing for unarmed observation flights over that stretch of coastline, following terms similar to the Open Skies Treaty. To grease the wheels for such an arrangement, the United States may need to come to the table over key sticking points in its relationship with Cambodia. This could include forgiving all or a portion of the $270 million loan given to the Lon Nol regime in 1970 for the purchase of bombs dropped in a coup against King Sihanouk, as well as increasing U.S. funding to demine the 4 to 6 million unexploded ordnances remaining in Cambodia. Both of these policy options should be done as an act of goodwill regardless of U.S. interests and may be necessary to put U.S.-Cambodia relations on a level permitting a proper assessment of China’s influence.

Beyond any agreement permitting observation, however, the continued work of America’s intelligence agencies is the most sure-fire way to determine whether the recent reports warrant, for instance, sending a task force of the U.S. Navy’s 7th Fleet to the Gulf of Thailand or even softening the hardline stance against President Hun Sen’s human rights violations as leverage. If, for instance, U.S. officials are to believe an anonymous Chinese official that the base will be used to support the Beidou navigation satellite system, with its applications in Chinese missile targeting and guidance, then a stronger response may be necessary. But U.S. officials should only base their actions on concrete analysis of the threat environment, something that is lacking without greater transparency into the construction process of the Ream Naval Base.

Harrison Nugent is a JD candidate at Stanford Law School and a Henry Luce Asia Scholar working at the Nakasone Peace Institute in Tokyo.