The Show Isn’t Over for the U.S. Air Force’s F-16 Fighters 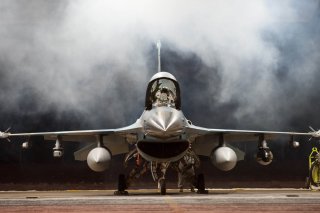 According to a recent interview in Air Force Magazine, the venerable F-16 fighter jet will continue to serve in the U.S. Air Force for up to another twenty years. While it lacks some of the capabilities of a dedicated 5th generation stealth fighter, the F-16 is a tried-and-true platform that can perform many lower-end duties.

The F-16 fighter jet is “one airplane that can do a lot of low-end missions, and remarkably cheaper than a fifth-generation platform, and it can do them well,” Lt. Gen. David S. Nahom explained to Air Force Magazine.

The jet can “satisfy an objective in the Middle East and a week later, fly [combat air patrol] over a point on the U.S., and do a homeland defense sortie. It’s pretty amazing. And do that at half … [the] operating cost of any other air platform we have out there.”

Nahom thinks that the U.S. Air Force can squeeze … another 18-20 years” out of the platform.

He compared the F-16 to the A-10, a close air support platform that excels in that role in an environment with little or no air defenses. Though the A-10 performs close air support exceedingly well, it cannot conduct homeland defense duties nearly as well as the F-16.

The Air Force initially paired the single-engine F-16 with the dual-engine F-15, a pairing known as a high-low mix that saw large numbers of F-16s fly with fewer numbers of higher-performance F-15s.

And while the Air Force has several new fighters in the development pipeline, its future force structure could look very different than the typical high-low mix.

Instead, the Air Force will rely on large numbers of F-16 fighters and medium to high capability F-35 fighters, with aircraft only able to operate in uncontested environments on one end, and highly capable, highly stealthy fifth-generation fighters like the F-22 and new sixth-generation fighters on the other end.

One of the crucial future questions is what exactly will replace the F-16. “Let’s fast forward to the 2035/2036-ish timeframe. Is there still a need for that low-cost platform? I think, right now, there is,” Nahom said in an interview.

“And what does it look like? Do we replace it with another F-16-looking thing? Did the F-35 come down in cost enough where we can buy more of them? Is it something else? Is it unmanned at that point, because we can do things differently?”