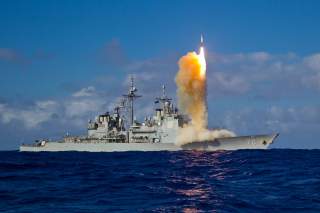 The U.S. Air Force relies on more than 5,000 aircraft to give it unmatched dominance over every other competitor on earth. The U.S. Navy, for its part, counts on more than 3,700 aircraft and 273 deployable battle force ships, which constitute the largest and most technologically advanced sailing branch in the world.

This much is true — no country can possibly hope to challenge the United States with military means on a global scale and win. But key to America’s global strength are huge air and naval bases which are vulnerable to being overwhelmed and destroyed by swarms of precision-guided weapons in a limited, regional war.

The Navy also cannot expect its ships to survive if they come under attack by sufficiently large numbers of cruise missiles and ballistic missiles of the kind now fielded by China. While better protected from missiles than bases, the current breadth of U.S. technology and doctrine cannot compensate for this weakness.

The result is that the Pentagon must radically rethink its missile defenses, or risk serious losses in the opening hours of a future conflict. But according to a recent report, the solution could be lots of futuristic lasers, guns and electromagnetic weapons that can engage enormous numbers of incoming missiles at relatively short ranges.

And lots of drones.

“Since the end of the Cold War, the Pentagon had the luxury of assuming that air and missile attacks on its bases and forces would either not occur or would be within the capacity of the limited defenses it has fielded,” analysts Mark Gunzinger and Bryan Clark wrote for the Center for Strategic and Budgetary Assessments, an influential defense policy think tank.

“These assumptions are no longer valid.”

Gunzinger and Clark’s report does not describe anything new for U.S. military planners. Russia, China and Iran have are investing heavily in missiles with an eye toward targeting American bases. But it’s China that is of particular concern, owing to the fact that Beijing is producing very large numbers of highly-accurate and long-range missiles.

Worse, the United States has fewer options to spread out its bases in the Western Pacific — it is largely stuck to islands — than it does in Europe or the Middle East, where dispersed “clusters” of bases are more feasible.

Beijing already fields thousands of cruise missiles and hundreds of ballistic missiles which can hit U.S. bases in South Korea, Okinawa and Guam. The U.S. Air Force has deployed Patriot air-defense batteries to the Western Pacific, but the anticipated target for the Patriot is a lone North Korean ballistic missile.

The Patriot cannot stand a chance if China throws everything it has at America’s installations.

There is a similar threat facing America’s surface ships. The bulk of the United States’ cruise-missile defenses are on warships, such as Arleigh Burke-class destroyers equipped with Aegis — an advanced suite of radars, command and control computers and anti-air missiles such as the Sea Sparrow, SM-2, SM-3 and SM-6.

This is a formidable defensive weapon system … when your enemy doesn’t have a lot of missiles to throw at you. In fact, the Navy designed these systems for engaging a relatively small number of incoming missiles at long ranges. This makes the SM family large, heavy and expensive. Another problem is that the ships’ launchers — the Mark 41 VLS — cannot be rearmed at sea.

A single Arleigh Burke destroyer has around 90+ air-defense missiles. But not every missile will hit its target. In their report, Gunzinger and Clark note that an attacker could expend 32 anti-ship missiles — at a cost of less than $100 million — to deplete a destroyer’s entire compliment of SM-6s (worth $300 million) given a 70 percent success rate on the part of the defending ship.

That doesn’t include the cost of the destroyer, which is about $2 billion. And all it takes is a single missile to either sink the ship, cripple it, or render it out of action for weeks or months. Even if the destroyer survives, it must return to port and rearm. All told, this tactic means China could, in effect, bankrupt the U.S. Navy over time.

China’s missiles are getting smarter. The YJ-18, in particular, is a very deadly anti-ship missile. Having only appeared in China’s arsenal within the past few years, the YJ-18 can travel 290 nautical miles, most of the way at a speed of 0.8 Mach. But once the missile closes toward a target — and within range of a defending vessel’s weapons — it dumps one of its “stages” and accelerates to a speed of Mach 2.5.

Which makes it difficult for its intended victim to track and destroy it.

However, there is a way to stop China’s missiles from delivering a knockout blow to the U.S. military in the Western Pacific, but it will take years and be expensive, too. The solution is also … complicated.

The main takeaway from the report — the United States can no longer take it for granted that long-range missile interceptors will do the trick. Instead, Gunzinger and Clark propose a mix of tactical tricks and new technologies, including electromagnetic railguns with guided high-velocity projectiles, air-defense lasers and guided artillery rounds like the kind DARPA is developing.

To make it harder to target U.S. forces, the report suggests dispersing bases when possible and hardening existing ones to force China to expend heavier, more expensive and longer-range weapons of its own. To strike the missile launchers before they fire, the authors want drones — lots of them — and stealthy bombers (like the B-21) that can penetrate China’s air defenses.

The United States wouldn’t have to abandon air-defense missiles — it just can’t depend on expensive, longer range variants. Electromagnetic weapons would be enormously expensive to develop (with manufacturing costs in the tens of millions of dollars each), so these will likely be less common than lasers, high-powered microwave weapons and short-to-medium range missiles that can be fired en masse.

If this vision ever comes to pass, it would be a major conceptual shift in how the Pentagon conceptualizes anti-missile defenses. Navy warships today include close-in weapons such as Phalanx to hit missiles during the seconds before they strike, but this is a last resort.

We also don’t how well this would work … unless an actual war breaks out — a real-life demonstration we’d be better off without.