This Sig Sauer Gun Is One Every Navy SEAL Will Respect 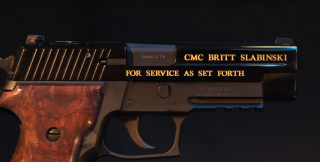 In May 2018, President Donald Trump awarded retired Navy Master Chief Britt K. Slabinski the Medal of Honor for his heroic actions while leading a Joint Task Force during Operation Anaconda in Afghanistan. Now Sig Sauer is paying tribute in its own way.

This past National Medal of Honor Day, the gunmaker unveiled a specially-designed commemorative P226 pistol — the same pistol that SEALs carried under the official MK25 designation — to honor Slabinski's receipt of the nation's highest award for valor.

The commemorative pistol includes ceremonial 24k gold engravings on both sides of the slide: "For Service As Set Forth," the first line of Slabinski's award citation, on the right side, and "No Day Shall Erase You from the Memory of Time, which is featured at the World Trade Center Memorial in New York City,”a on the left.

The top of the slide features a likeness of the Medal of Honor engraved on a piece of metal recovered from the World Trade Center site, as well as six stars to honor SEAL Team Six.

The grips, custom made from American Black Walnut, feature the Red Unit Medallion on the right and the SEAL Trident on the left.