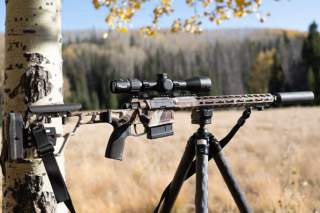 Key point: With a street price of around 1600 USD, Sig Sauer is aiming squarely at would-be Fix owners with the CROSS.

In late December, Sig Sauer, Inc. debuted its first bolt action rifle, the Sig CROSS. While Sig Sauer, Inc. (then known as SIGARMS, Inc.) sold bolt actions prior, the SSG 2000 and SSG 3000 were designed by Sig Sauer, GmbH in Germany, not by the U.S. division.

The Fix’s handguard uses the proprietary Q-sert handguard system, while the Sig CROSS uses a standard M-LOK handguard. While this may appear to be a disadvantage for The Fix at a glance, M-LOK is generally considered to be not strong enough to reliably mount bipods on rifles, due to the relatively thin nature of the actual M-LOK attachment point in the standard. Mounting bipods directly on M-LOK can result in the bending of the M-LOK slots the bipod is mounted on due to the torque that is applied in regular bipod use. The Q-sert attachment design seems to be more robust, as such The Fix’s handguard design is superior for the purpose.  As Q has used M-LOK on some of their other products like the Honey Badger and Sugar Weasel, the decision to go with Q-sert on The Fix is likely an acknowledgement of M-LOK’s shortcomings, and not a desire to simply make the rifle proprietary.

Whether the CROSS will be successful is yet to be seen. But with a street price of around 1600 USD, Sig Sauer is aiming squarely at would-be Fix owners with the CROSS.

Charlie Gao studied Political and Computer Science at Grinnell College and is a frequent commentator on defense and national security issues. This article first appeared earlier this month.