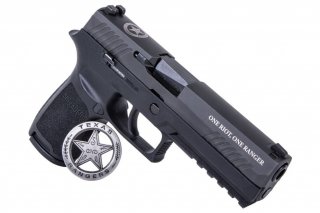 With a Texas Ranger Limited Edition moniker for a handgun, you might expect to see a Colt Paterson revolver, but that was way back then. Instead, today customers have the reliable and respected Sig Sauer P320 pistol. This limited-edition version of the striker-fired 9mm pistol features the same modular polymer grip and SIGLITE Night Sights of the standard full-size P320.

The P320 is noted for its "modular" frame system that allows the internal metal frame, which holds the pistol's trigger and fire control mechanism, to be removed from the plastic grip and swapped for something more ergonomic as the situation requires.

"For nearly 200 years, the Texas Rangers have served and protected the Lone Star State, my beloved home state, and today the Sig Sauer P320 is in service with the officers of all 13 divisions of the Texas Department of Public Safety, including the Texas Rangers," said Tom Taylor, chief marketing officer and executive vice president for commercial sales at Sig Sauer via a statement.

The Texas Department of Public Safety has used the Sig Sauer P320 since 2018 when it ordered 4,000 for use with the Texas Highway Patrol, Criminal Investigations Divisions (CID), Aircraft Division, Executive Protection Bureau, Intelligence and Counterterrorism branch, SWAT, Special Operations Group and of course the Texas Rangers.

Since that time, the P320 has been the standard sidearm of one of the largest law agencies in the United States.

The P320 has been called Sig's answer to the Glock, and a variant of the P320 was even adopted by the U.S. Army as the M17. Its light recoil and reliability have made the Sig P320 a favorite for the military, law enforcement and civilian shooters alike. It provides numerous customizations yet remains fairly in its design.

The Texas Ranger Edition P320 full-size pistol has an overall length of 8-inches, an overall height of 5.5-inches and a width of 1.30inches. It weighs 29.6 ounces with a magazine. It is now shipping with two magazines and is available as a TALO exclusive and is priced at $699.99—$150 more than the standard P320.