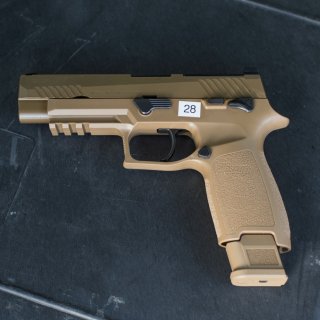 Sig Sauer won the bid for the U.S. Military’s new secondary service weapon. The M17 is making its way into the hands of our military as well as our citizens with the M17 “Commemorative” edition. Now Sig has paved its way with a solid reputation with plenty of guns I bring out to the range regularly. Sig has made its way into media too with guns like the MCX Rattler and P226 being featured in plenty of video games. The M17 even earned a spot in Call of Duty: Modern Warfare (2019) as the “M13.” Is the M17 that good or is it a dud?

I think the M17 is a gorgeous firearm. The Coyote Tan finish looks great and I don’t have any complaints whatsoever about the visuals of this handgun. The functions and controls are all similar to other Sig Sauer firearms or any other pistol for that matter so weapon manipulation shouldn’t be a problem. It features slide serrations on both the front and rear. This is actually the only functional thing I would change. The front serrations are only on the lower half of the slide. I typically grip the upper portion of the slide in the crook of my thumb and pointer finger. It’s a small complaint, but it’s something that I wish was different.

I haven’t had any issues with reliability thus far, even when I switched to steel-cased ammunition as opposed to brass. That was after several hundred rounds as well. I usually don’t have any issues with a lot of the mainstream pistols though. I consider reliability to be the standard. With that being said, the M17 ran like a dream and I felt like I was never going to run out of ammo with those twenty-one-round mags.

The M17 comes with three magazines out of the box. A single seventeen-rounder and two twenty-one-round magazines.  I thoroughly enjoyed mag-dumping those bigger magazines. This mag capacity is the main reason I use my M17 as more of a “house gun.” It’s a little too big to carry around with those mags, but I like keeping it around the house so I can grab it real quick if the need arises.

The M17 proved to be pretty dang accurate. I usually kept my groups to around 2.5 inches at 25 yards with the occasional flier here and there. Those outliers were my fault.

The Sig Sauer M17 is definitely a high-quality pistol and I sure do love it. I personally wouldn’t use it for concealed carry, but I like having it around the house and it’s a blast to shoot. I didn’t find much to complain about and I’m glad I bought it. So if you can find one, I’d snag it. And even if you don’t shoot it, it’s a neat gun to add to the collection.