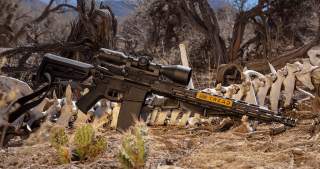 With over 16 million units currently in circulation, the AR-15 platform has taken the U.S. semi-automatic rifle market by storm. “America’s Rifle” enjoys widespread popularity for its highly modular design and component diversity, though the sheer number of build options can prove daunting for first-time shoppers.

The leading brands seldom produce modern sporting rifles of outright unacceptable quality, but this doesn’t mean that all AR-15’s are created equal. The AR-15’s commercial success has spawned a highly specialized market with products that tend to be calibrated for specific tasks, such as hunting or serving as a designated marksman’s rifle (DMR). With the M400 Tread, Sig Sauer is targeting consumers who are not necessarily looking to commit to a specific performance niche. The Tread is built with a direct-gas-impingement (DGI) system, a design choice that raised some eyebrows when the M400 was first announced. DGI has been criticized over excessive heat, maintenance, and component degradation concerns, but it offers two crucial benefits: DGI’s generally lower manufacturing cost and component weight allow the Tread to be competitively priced at an MSRP of $800, and to clock in at a reasonable 7 pounds. But as with most DGI-built rifles, a pair of gloves will still come in handy for long or intensive shooting sessions.

The Tread’s design is very much in keeping with Sig Sauer’s no-frills aesthetic, sporting a 16-inch stainless steel barrel encased within a free-floating M-LOK handguard. The gun features an adjustable stock and is chambered in 5.56 NATO. There are, however, two minor design surprises: a 3-prong flash hider, and a removable yellow “Tread” plate on the handguard. More than just a branding reference to the iconic “Don’t Tread On Me” Gadsden flag, the yellow plate “Tread” symbol denotes what is arguably the rifle’s most attractive feature: a robust suite of fully-compatible, factory-optimized accessories. There are different versions of the aforementioned handguard is available in 13 or 15 inches, a Romeo5 red-dot and a variety of iron sights, an ambidextrous charging handle for enhanced handling and shootability, foregrips and handstops, and a grip capable of storing small batteries to power any mounted optics. While these are not necessarily unique or class-leading features in of themselves, newcomers to the AR-15 platform will appreciate the simplicity of purpose-built, fully compatible accessories that are advertised and often sold alongside the rifle itself.

Intelligently implemented accessories help the M400 Tread punch above its weight, sometimes trading performance blows with much more expensive entries in the M400 lineup. Even more conveniently for its intended audience, it achieves a respectable level of midrange performance without the need for extensive aftermarket modding. As a minor caveat, shooting tests with the Tread indicate that the trigger, though serviceable, could use some further calibration to reduce its somewhat heavy pull.

The M400 is not for everyone-- those looking for class-leading performance would be better served by something like the premium-priced M400 Elite, but that was never the Tread’s intended audience to begin with. But it is, however, for anyone looking to get their feet wet with the AR-15 platform. Consumers in the market for a mid-range, general-purpose AR-15 that can perform across a wide range of roles, including home defense, hunting, and even entry-level 3 gun competitions, have themselves a compelling option in the M400 Tread.