Sig Sauer Wants to Make a Big Change To Its Guns 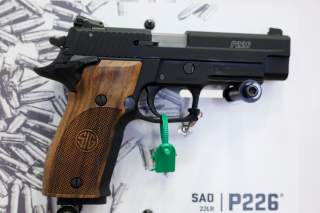 While the polymer-framed striker-fired pistol may be currently dominating the civilian handgun market, there has been some pushback. Some shooters desire a return to old steel or alloy frames, as a heavier metal slide on a lighter polymer frame has increased muzzle flip versus an all-steel design.

Walther was one of the first companies to capitalize on the desire for a heavier steel-framed version of one of their striker-fired polymer designs when they released the Q5 Match Steel pistol, a steel-framed version of their popular PPQ series. By most accounts, this pistol has been a hit with shooters, providing the consistent, excellent trigger pull the PPQ is known for on a heavier steel frame that soaks up the recoil.

Sig Sauer, Inc. also has responded to the demand recently with the release of the P320 XFIVE Legion pistol. This pistol is the first from the myriad of P320 variants to receive Sig Sauer’s “Legion” branding, a brand typically reserved for guns that have some level of enhanced parts put into them.

For the P320 XFIVE Legion, this is the special frame that is said to be “TXG tungsten-infused polymer,” which supposedly makes the regular polymer P320 grip module “as heavy as steel.” TXG is probably an easy way for Sig Sauer to make a heavy frame version of the P320 without doing much engineering to create a steel frame version. The XFIVE Legion model, in particular, combines this heavy frame with a slide with significant lightening cuts, which reduces muzzle flip even further by balancing the weight between the frame and the slide.

Now in August 2019, the TXG heavy grip modules can be purchased separately, so any full-size P320 can receive this upgrade. According to Sig Sauer, the weight of the module reduces muzzle flip by 50 percent. While probably of marginal benefit to those who use the P320 in a duty setting, as pistols are carried more than they are shot, the new grip module will probably be a hit with those who primarily use the P320 as a range gun. In some ways, it vindicates Sig Sauer’s original design of the P320 as a modular grip pistol, as the addition of a TXG grip as a choice provides a truly different and functional change to those who want it.

Will other manufacturers follow in suit? Perhaps. It’s unlikely that Glock, which built its brand on the idea of a polymer frame pistol, will make a metal-framed version of their gun. However, companies such as DRD Tactical have built full steel framed Glock-alikes. But for most companies, it would make sense to copy Sig Sauer’s metal-infused polymer technology if possible to create “heavy frame” versions of their existing pistols, as existing frame dimensions and specs could continue to be used.