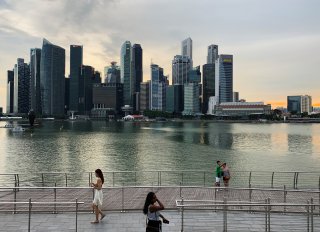 Of the infected, twenty people have died from the disease, which is known to cause extreme fevers that can lead to internal bleeding and shock.

For comparison, only twenty-seven people have died out of more than fifty-six thousand confirmed cases of the coronavirus in the small Southeast Asian island nation of 5.7 million people.

The dengue virus is carried and spread to humans via infected mosquitoes, according to the World Health Organization.

Singapore, however, is tapping into novel technology to battle the virus.

Specially bred male mosquitoes are now being used to carry a bacteria that prevents eggs from hatching, which will “compete with the wild type” and lead to “a gradual reduction of the mosquito population,” Ng Lee Ching, the official who is heading the Wolbachia project, named after the bacteria, told Reuters.

The male mosquitoes don’t transmit diseases like dengue, as the females only bite for blood.

She added that some areas with high mosquito populations have witnessed up to 90 percent declines using this particular technique, which has been used to great success in Australia.

However, some experts worry that this project wouldn’t be as effective in a dense urban area like Singapore.

“You’ve got to flood the island with these mosquitoes, and people get annoyed,” Paul Tambyah, a senior consultant at Singapore’s National University Hospital, told Reuters.

“They’re not going to grab the mosquito and examine and see whether it’s a male or female. They’re going to swipe them away, and that kind of defeats the purpose.”

In the United States, more than 750 million genetically modified mosquitoes recently received final approval from local authorities to be released into the Florida Keys over the next two years.

The biotech company Oxitec’s mosquito—known as OX5034—is a genetically engineered version of the Aedes aegypti, a type of mosquito that can carry diseases like dengue, Zika virus, chikungunya, and yellow fever.

The pilot project is aiming to see if these mosquitoes can be a viable alternative to spraying insecticides to control the Aedes aegypti population.