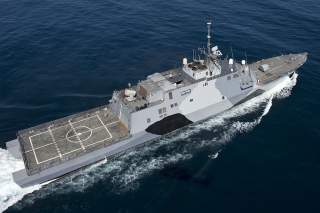 Lawmakers are giving the U.S. Navy three more littoral combat ships than the service actually wants or needs, because of course they would.

Although the Navy set a requirement of 32 LCS’, lawmakers offered up funding for three more while cutting funding for modules that would make the current ships more useful, such as an anti-submarine warfare package and a variable-depth sonar.

The annual cutting spree has created a baffling cycle of inanity wherein Congress, unhappy with the development of the modules falling behind schedule, will cut funding and cause development to fall further behind schedule, according to a source familiar with the details of the impact of the cuts who spoke on background. All this while Congress continues to pump money into building ships without any of the mission packages having achieved what’s known as initial operating capability, meaning the equipment is ready to deploy in some capacity.

(The surface warfare version has IOC-ed some initial capabilities but is adding a Longbow Hellfire missile system that will be delayed with cuts, the source said.)

The Navy isn’t the only service to deal with this kind of weirdness. The Army, for example, repeatedly and emphatically told Congress, please, for the love of all that’s holy, do not give us money for any more tanks, before lawmakers authorized a truckload of cash for the service to buy more or upgrade its existing tanks.

Then, of course, there is the issue of the LCS itself, which has been unofficially dubbed the “Little Crappy Ship” due its host of problems, from insane cost overruns to lack of survivability. Or its absence in the deployment schedule, despite nearly a dozen ships being deemed ready.

Still, funding more of a terrible ship rather than improving the existing ones is pretty much par for the course in the defense contracting world. With LCS numbers 33, 34, and 35, we’re just seeing the most recent examples.