Sinking Feeling: The U.S. Navy Is Losing Its Submarine Advantage to China 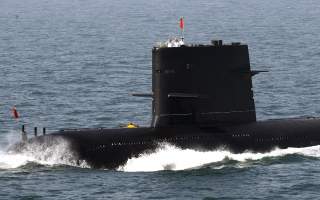 It's getting easier for Chinese submarines to operate in the shallow water of the Taiwan Strait, and harder for American submarines to deploy in sufficient numbers to hunt down the Chinese boats.

That could pose a serious problem in the event of war between China and Taiwan.

As of early 2019, the United States still possessed what U.S. Navy admiral Philip Davidson, the commander of U.S. Indo-Pacific Command, described as an "asymmetric advantage" in undersea warfare.

But China was adding submarines to its fleet while the U.S. sub force slowly was declining.

In December 2016, the U.S. Navy announced it needed 66 attack boats to meet regional commanders' needs. But in early 2019 it had just 51 attack boats.

Six years later, that number could be lower. In a few years, it likely will be lower, still.

In early 2019 China possessed around 50 diesel-powered attack submarines and six nuclear-powered attack subs and was on track to add several more boats by 2020, the U.S. Defense Intelligence Agency reported in February 2019.

"Although all of these classes remain in service, only the Yuan SSP is in production. Over time, reducing the number of classes in service helps stream­line maintenance, training and interoperabil­ity."

The 17 Yuan-class boats that were in service in 2019 are the most advanced conventional submarines in the PLAN and probably also the most reliable. They could pose the biggest challenge for U.S. and Taiwanese forces.

"The Yuan has the added benefit of an air-in­dependent propulsion (AIP) system and may have incorporated quieting technology from the Russian-designed Kilo SS," according to the DIA. "The AIP system provides a submarine a source of power other than battery or diesel engines while still sub­merged, increasing its underwater endurance and reducing its vulnerability to detection."

"Furthermore, maritime geography may circumstantially limit larger submarines' physical maneuverability," Holst added. "It is conceivable that an adept PLAN submarine captain ... could take advantage the Yuan’s shallow draft and wedge the SSK into a difficult-to-access channel or maritime feature, and thereby forcing higher-technology SSNs to fight on unfavorable terrain whose geography and acoustic signatures favor the defender."

Glosny simulated a Chinese blockade of Taiwanese ports meant to starve the Taiwanese economy and concluded that Chinese boats would succeed in sinking just one out of every 34 merchant ships over a six-month period -- too few to force Taiwan to capitulate by those means alone.

But if the PLAN were to boost production of Yuan-class submarines and deploy them against U.S. warships rather than merchant vessels, the Chinese could force the Americans to rethink how they would intervene in a cross-strait war.

In that case, America's dwindling submarine fleet could be inadequate to destroy China's own growing sub fleet before the Chinese boats seized control of the shallow waters around Taiwan.

"The PLAN’s large SSK fleet would complicate U.S. [anti-submarine warfare] even if the pace of SSK elimination were high," Holst wrote. "Such a scenario would buy precious time for the PLA in a Taiwan contingency. … The PLA may be seeking the ability to force a situation where the U.S. Navy’s surface fleet would be required to either accept a high level of risk, or operate further away from Taiwan."

"The United States must maintain its advantage in undersea warfare," Davidson declared. But it's unclear how it can do so, when it can't build submarines fast enough to erase the Chinese undersea fleet's own growing numerical advantage.