Six Companies Want to Help Taiwan Build Its Own Submarines 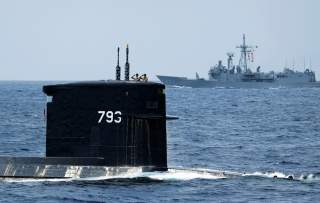 Six different companies are seeking to help Taiwan build its own submarines to counter the growing threat it faces from China.

On July 10, the local media outlet, Taiwan News, reported that Taiwan had received bids from six foreign firms for its “Indigenous Defense Submarine” program. The report said that the bidders included two European firms, two American firms, as well as one each from India and Japan.

Although it did not further identify the four European and American firms, it added that “the Indian team has experience with the diesel submarines in service in the Indian Navy. The Japanese team reportedly includes retired engineers with previous experience working for Mitsubishi on the Harushio class submarines, and large scale projects under Kawasaki Heavy Industries.”

Separately, Edward Rehfeldt, the chairman and chief executive of the Rehfeldt Group, a U.S. firm with experience in Taiwan, told the Hong Kong-based South China Morning Post that his firm was involved with helping Taiwan enhance its military capabilities. Rehfeldt would not confirm whether his firm was involved in the submarine program, however.

According to Taiwan News, the six foreign firms submitted design proposals, and “the preliminary designs will be accepted and reviewed before more detailed construction blueprints are completed.” The Taiwanese governments hopes to select one of these designs by March 2019.

At that point, the Ministry of Defense and industry will begin working on finding a firm to build the boat. The hope is that construction can begin before 2020, although that seems ambitious.

Previously, Taiwan has said it would need four years to build the submarines and two years of testing. If it did meet these deadlines, then it would have the first new submarines ready around 2026. In 2016, Taiwan announced a life-extension program to keep its current submarines running until 2030. That is probably the hard deadline for getting the new submarines operational.

Interestingly, Taiwan News reports that Taiwan’s Ministry of Defense will work with U.S. contractors in selecting the preliminary design of the submarine. That’s because in April of this year the State Department approved a marketing license that allows U.S. defense companies to explore selling Taiwan the technology it needs to build submarines.

Accordingly, Taipei expects to use U.S. technology in building its submarines, albeit U.S. firms would still need to get export permits before any actual transfers took place. Nonetheless, the U.S. contractors are helping to select the designs to make sure they are capable of using American technology.

There is little doubt that Taiwan desperately needs more advanced submarines to protect itself from a growing pressure campaign from Beijing.

Last year, President Tsai Ing-wen declared, “Strengthening underwater combat capabilities is most needed in Taiwan’s defense. . . . This is a problem everyone recognizes. We have been unable to solve this in the past. As commander of the armed forces, I am determined to solve this problem.”

Currently Taiwan’s underwater fleet consists of a measly four aging subs. Its newest vessels are two Dutch-built 2,600-ton Hai-lang–class diesel-electric submarines that were purchased and delivered in the 1980s.

The other two are the Hai Shih and Hai Pao, which were built for the U.S. Navy in World War II and given to Taiwan in the 1970s. Suffice to say, these latter two are the oldest submarines in service anywhere in the world.

So far Taiwan has failed to find foreign partners to sell it modern submarines, although not for lack of effort. In 2001, the George W. Bush administration pledged to help Taiwan acquire eight diesel-powered submarines. The problem is that Washington stopped building conventionally powered submarines in the 1950s.

The Bush administration reportedly believed it could enlist Germany and the Netherlands to sell the submarines to Taiwan. It failed to ask either country before making its announcement, however, and wasn’t able to persuade them to do so afterwards. Most countries are too concerned with angering China to sell Taiwan major military items.

These failures are what led Taiwan to undertake the indigenous program. But the challenges (not to mention expense) of building a homegrown boat are hard to overstate.

According to Kyle Mizokami, “Taiwan will basically start from square one in designing this submarine. The country is so bereft of submarine design experience that in 2015 it was reportedly ready to tear down one of the World War II-era subs to figure out how to build modern submarines.”

The cost factor is also significant, as Taiwan has estimated the first four boats alone might cost $5 billion. But, all things being equal (which is obviously not really the case), it is hard to argue with the strategic logic of Taiwan having a formidable underwater fleet.

As I’ve argued before, Taiwan’s best approach for stopping a Chinese invasion is to pursue an anti-access/area-denial (A2/AD) strategy. And, as other countries like Japan and Vietnam have correctly surmised, an A2/AD strategy against China should make heavy use of submarines as Beijing’s anti-submarine warfare (ASW) capabilities have traditionally been fairly weak.

In this scenario the Taiwanese submarines would primarily lie in wait and sink Chinese war and transport ships. They could also be used to conduct attacks against China’s missile and air defense systems on the mainland. This will require having submarines built this century.