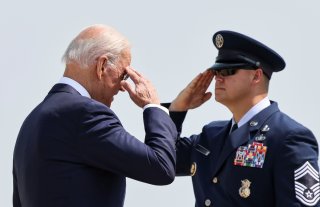 U.S. leaders could greatly reduce the risk that adversaries of the United States will join forces and engage in a catastrophic attack on the U.S. homeland by adopting a new national security strategy that would be less provocative to Russia and China. There are six critically important steps that the Biden administration could take to further deter U.S. enemies from attacking the United States, defend America, and save tens of millions of American lives in the unfortunate event that U.S. adversaries do attack.

In recent years, the Russian Federation and the People’s Republic of China have continued to strengthen their two-decades-old military alliance and have engaged in a number of joint military exercises. In addition, there have been reports that they have taken steps to form a joint missile defense system. The Russian national missile defense system consists of several thousand anti-ballistic missile (ABM) interceptors and is potentially capable of shooting down 80 percent of America’s second-strike nuclear warheads following a Sino-Russian nuclear first strike. This would leave perhaps six dozen U.S. warheads to impact super-hardened Russian and Chinese intercontinental ballistic missile (ICBM) silos, which might be able to survive near misses, and deep underground nuclear command centers, which may be impervious to nuclear attack. Mark Schneider, one of the top U.S. nuclear weapons experts, explains that even setting aside the massive Russian national missile defense system and expanding Chinese national missile defenses, the U.S. nuclear arsenal is insufficient for its mission to hold enemy nuclear forces and underground nuclear command centers at risk.

There is an increasing disconnect between our nuclear strategy (which targets military strategic targets rather than population centers) and our nuclear targeting capability….With our current forces, the U.S. cannot possibly target these new Chinese and Russian (nuclear missile) silos with any serious level of effectiveness. . . . In addition to the new silos, China has built the “Underground Great Wall” to protect its mobile ICBMs and Bill Gertz has reported that Russia was “modernizing deep underground bunkers.” These are extraordinarily difficult to destroy or even to threaten seriously. . . . When Russian ICBM force expansion and the deep underground facilities in Russia and China are taken into account, our existing and projected nuclear forces have little capability to threaten them. Numbers count, and we no longer have the numbers.

According to China expert Gordon Chang, Russia and China are likely coordinating not only on joint defensive planning but also on joint offensive plans as well to push the United States out of their respective spheres of influence by force. They might even be planning to neutralize the United States with one or more unconventional means of existential attack at the onset of conflict to eliminate the chance of any future U.S. interference in their respective spheres of influence.

In addition to the adoption of a new, less provocative grand strategy, which aligns more with America’s limited military means and recognizes Russia and China’s vital interests and spheres of influence, the other important national security imperative that America must pursue to ensure its survival is to adopt a policy of strategic rearmament similar to the one the United States pursued during the early stages of the Cold War. U.S. policymakers must return to the more realist, Cold War way of thinking because a nuclear war with nuclear adversaries is not only possible but increasingly probable. This realization should compel U.S. leaders to engage in a herculean, bipartisan effort to rebuild U.S. nuclear deterrent and strategic defenses as swiftly as possible. Funding should be repurposed from less important programs for this purpose, much as the United States did just before and shortly after the outbreak of World War II.

There are a number of important measures that the Biden administration and the U.S. Congress should implement as soon as possible to safeguard America against these existential threats. First, President Joe Biden should declare a presidential cyber/EMP/missile defense emergency to reallocate $30 billion dollars in funding to fully harden U.S. electronic power grid and other critical infrastructure, particularly U.S. nuclear Communications, Command, and Control (C3) systems, as well as future U.S. military satellites against cyber/EMP attack. In addition, Biden should use this emergency declaration to reallocate $150 billion more to build 5,000 SM-3 Block IIA ABM interceptors to deploy on sixty of the U.S. Navy’s Aegis cruisers and destroyers whose primary role should be “boost phase” national missile defense, not conventional military power projection. Hundreds of these missiles have already been purchased by the U.S. Navy.

The Biden administration should also consider deploying space-based non-nuclear missile defenses, which would be even more effective in deterring enemy nuclear attacks and shooting down rogue, accidental, or deliberate nuclear missile attacks. Furthermore, as part of this emergency declaration, Biden should invoke the Defense Production Act to order U.S. companies to increase U.S. tritium gas production to ensure the United States can produce enough of it for its aging strategic nuclear warheads to work in a crisis. Fully funding these measures could be readily obtained by ending America’s two-decade-long Global War on Terror, closing the vast majority of America’s nearly 800 overseas military bases, and bringing most of the United States’ nearly 200,000 forward-deployed military personnel home to their families, which has been estimated could save $160-200 billion per year.

Second, Biden should act swiftly to increase the Operations Tempo (OPTEMPO) of America’s Ohio-class nuclear missile submarines from one-third to two-thirds, which would increase the number of nuclear missile submarines at sea at any given time from four to eight. This critically important and relatively inexpensive measure would effectively increase the number of “ready to fire” land- and sea-based nuclear warheads to 1,040 while doubling the number of survivable, second-strike retaliatory strategic warheads. This would serve to ensure that America’s nuclear adversaries would not be able to destroy the bulk of its nuclear-missile submarine fleet in port in the event of a nuclear first strike. This is one of the most critical near-term steps U.S. leaders can take to rapidly restore the credibility of America’s nuclear deterrent to discourage potential nuclear aggression by its nuclear-armed adversaries. Important related steps would be to return the Air Force’s fifty-eight B-52H and twenty B-2 nuclear bombers to twenty-four-hour “strip alert,” to help ensure a significant number of them survive a potential nuclear first strike, and restore the nuclear capabilities of its sixty B-1B bombers, which are the only supersonic strategic bombers the United States currently has in service.

Third, Biden should use the upcoming 2022 Nuclear Posture Review to set the objective that the United States will seek to re-establish “rough” nuclear parity with Russia to help ensure its nuclear arsenal remains sufficiently large to deter a Sino-Russian nuclear attack on the U.S. homeland. The United States should tailor the size of its nuclear arsenal based on the increasing nuclear threat posed by America’s peer competitors—Russia and China. Specifically, the Biden administration should reject the dangerous calls of those who contend that the United States should unilaterally disarm itself of all but 1,000 of its strategic nuclear warheads, which is less than one-third of Russia’s and China’s current estimated strategic nuclear arsenals and perhaps one-eighth the size of their projected nuclear arsenals once their present nuclear buildups have been completed. Nuclear deterrence is only credible when there is “a balance of terror.” By contrast, the increasing imbalance between the size of the U.S. nuclear arsenal and the nuclear arsenals of its enemies threatens to embolden them, making a preemptive nuclear/cyber/EMP strike against the U.S. homeland increasingly likely.

Since both Russia and China appear to be in the process of rapidly surging their nuclear arsenals to 3,000 to 4,000 deployed strategic nuclear warheads each, the administration should immediately withdraw from the New START Treaty, which limits the United States to only 1,550 treaty-accountable strategic warheads. Biden should then take urgent action to issue an executive order to begin restoring rough nuclear parity with Russia and China by returning the 2,000 strategic nuclear warheads the United States has in reserve as a hedge against precisely the kind of geopolitical contingency that is unfolding today. This would serve to expand the U.S. strategic nuclear arsenal from 1,600 today to as many as 3,600 over a period of six to twenty-four months without the need to build additional warheads in the near term.

As part of this undertaking, the administration should also increase the number of Trident II submarine-launched ballistic missiles (SLBMs) on each Ohio-class nuclear-missile submarine from twenty to twenty-four while increasing the number of warheads on each SLBM from four to eight and increasing the number of warheads on each of the Minuteman III ICBMs from one to three. This would increase the number of operational SLBM warheads from 900 to approximately 2,200 and ICBM warheads from 400 to 1,100. In addition, rather than developing hypersonic missiles with conventional warheads, the United States should build and deploy hypersonic missiles that are armed with nuclear warheads to deter the use of Russian and Chinese hypersonic missiles, all of which are armed with nuclear warheads. Furthermore, the United States should consider employing full-spectrum deterrence by developing and deploying super-EMP weapons similar to those of Russia and China to more effectively discourage the use of these devastating weapons against the United States.