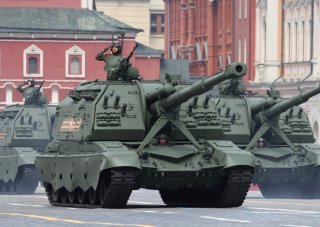 Despite its widely observed operational setbacks, logistical failures, tactical inefficiencies, and morale problems, the Russian military remains a massive force in the sheer numbers of soldiers, hardware, vehicles, and weapons systems it commands.

However, Pentagon observers say Ukrainian fighters are overcoming their military disadvantages due to their effective logistics, innovative tactics, and will to fight.

“[The Ukrainians] are performing very, very well on the battlefield, their unit cohesion is not an issue, their command and control is not an issue, their logistics and sustainment has been nothing short of historic…” a senior U.S. Department of Defense (DoD) official told reporters, according to a Pentagon transcript.

Despite its heavy losses and inability to seize and hold territory, the Russian military still poses an immense threat to Ukraine; Moscow commands more than 12,000 tanks and four times as many active duty soldiers, according to Globalfirepower.com. The 2022 assessment on Global Firepower reports that Russia operates 850,000 active duty forces, compared with Ukraine’s 250,000. There are also enormous discrepancies in other key areas such as attack helicopters, armored vehicles, fighter jets, and artillery. For instance, Russia operates nearly six times as many self-propelled howitzers, three times the amount of towed artillery, and a significantly higher number of mobile rocket projectors (3,391 to Ukraine’s 490). This numerical imbalance might help explain why the Russians continue to bombard Ukraine with missiles, and why the Ukrainians have been provided with U.S. weapons, including 155 M777 towed howitzer artillery systems.

The senior DoD official also emphasized the difficulties of assessing ongoing combat operations, as well as what determines the outcome in war. Having more force or firepower alone—if not matched with the necessary morale, sustainment, supplies and tactics—might not yield the hoped for results.

“Now, again, combat capability itself doesn't win wars, you've got to have the will to fight, you have to have good leadership, you have to have command and control, and they're suffering from that. But all of that combined with the fact that we're talking about an area of Ukraine that these two sides have been fighting over for eight years we just continue to believe that this could be a prolonged fight,” the official said.

The Russo-Ukrainian War has provided clear evidence that sheer force size alone is not sufficient for victory. Indeed, without proper tactics and logistics, a much smaller, decentralized, yet highly motivated Ukrainian force has been able to destroy a larger and highly-mechanized Russian force with anti-armor weapons, ambush tactics, and dispersed, yet networked formations.