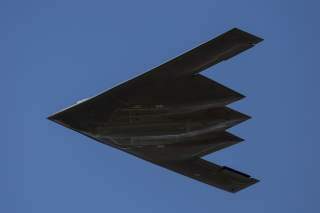 The chief designer of China’s recently unveiled Sky Hawk stealth drone compared the Sky Hawk to the U.S. MQ-25 Stingray unmanned stealth tanker. Like the Stingray, the Sky Hawk is a flying wing design, and made its first public flight earlier this month.

Details of the Sky Hawk are scarce, though it has been described by Chinese press as a fast, long-range and high-altitude unmanned reconnaissance aircraft. Physically, it resembles a smaller version of the U.S. B-2 stealth bomber, though the more interesting comparison is with Lockheed Martin’s recently unveiled X-44A unmanned aircraft, an experimental tailless aircraft with a 30-foot wingspan.

However, Ma Hongzhong, the Sky Hawk’s chief designer at the state-owned China Aerospace Science and Industry Corporation, compared the Sky Hawk’s stealth characteristics to the MQ-25. The MQ-25 “does not actually use the flying wing layout, nor is it a completely normal layout,” Ma told Chinese news site Thepaper.cn. “Which is equivalent to the wing body fusion, but the angle of the vertical tail is larger, so it is just a drone between the normal layout and this flying wing layout. The MQ-25 design may have taken into account some other factors. It is reported that the MQ-25 has relaxed the requirements for stealth in order to increase the fuel load and reduce the cost, so it did not use the original flying wing layout.”

In contrast, the Sky Hawk was expressly designed as a stealth flying-wing reconnaissance platform able to operate in contested skies. “Obtaining intelligence information in a strict confrontation system and a high-threat environment is the most basic function that the Sky Hawk UAV must have. Therefore, we combined the characteristics of stealth capability, flying wing layout and high-altitude high-speed flight to develop the Sky Hawk, a high-altitude, high-speed, stealth, unmanned reconnaissance aircraft that can perform tasks in high-risk environments.”

Ma also compared the Sky Hawk to U.S. Predator and Reaper drones, which are older designs not designed with stealth in mind. These American drones “adopt a regular shape and can achieve a certain stealth effect after adopting stealth measures. However, the shape is still very critical. The shape of the Sky Hawk itself reduces a lot of reflective surfaces, such as no flat tail and vertical tail. This shape design, together with some other stealth measures, can reflect the radar of the drone. The area is much lower. At the same time, this is also a relative value. The normal layout can add some stealth measures to reduce the RCS (radar scattering cross-sectional area), but the flying wing layout plus stealth measures, the effect is better than the conventional layout of the aircraft.”

Ma said that Sky Hawk already has the capability to team up with manned aircraft, a concept that is being pursued by the U.S. military. Perhaps more important, Ma suggested that the Sky Hawk could be converted into a strike UAV. “We first positioned the Sky Hawk as a drone that is mainly for tactical infiltration reconnaissance. Of course, with the development of serialization, it is also possible to develop it into a model that has the ability to attack. Anyway, if the key technology breaks through, it is possible to add other specific task loads based on the requirements of the combat mission.”

The U.S. did something similar, with the MQ-1 Predator and MQ-9 Reaper evolving from a surveillance platform into missile-armed drones that have become America’s weapon of choice for air strikes that don’t risk the lives of American pilots.

Sky Hawk could become China’s terror of the skies.

Revealed: Behind the Shadowy B-21 Stealth Bomber's Veil of Secrecy