Sky Minivans Will Carry These Drones to Battle Zones 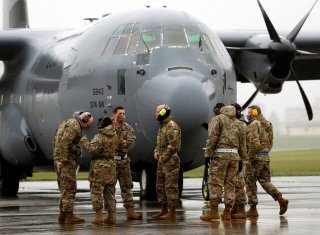 Here’s What You Need to Remember: Many weapons developers think of Air Force cargo planes such as C-17s and C-130 as primarily transport platforms able to deliver supplies, weapons and forces engaged in forward-positioned combat operations. However, the service is increasingly considering also using these kinds of aircraft for actual attacks instead of just cargo transport.

There have been several interesting innovations, now at various stages of development, including efforts to arm cargo planes with bombs and operate them as aerial drone “motherships” able to launch and recover drones in high-threat combat circumstances.

For years, it has been possible to launch expendable drones from the air, without needing a ground control station, provided they do not return to an aircraft. However, several programs have in recent years embarked upon a technical effort to engineer specially configured aerial drones able to both launch and return to a host aircraft.

“Let’s think about how we can get attributable gliders that could be recaptured and rearmed aboard a C-17 flying outside of a kinetic threat area,” Air Force General Jacqueline D. Van Ovost, Commander, Air Mobility Command, told The Mitchell Institute for Aerospace Studies in a video interview.

Building upon this, Van Ovost introduced the tactical concept of launching, recovering and then re-arming small drones to extend attack missions. This would enable longer dwell time or “on-station” attack options for cargo planes operating drones from a safer stand-off range. It would enable a non-combat platform such as a C-17 to more fully support offensive missions such as blanketing or testing enemy radar and air defenses or even launching mini-drone explosives to descend upon and attack a target before returning to re-arm with new ammunition or explosive material.

Several years ago, the Air Force launched expendable “Perdix” mini-drones from the flare dispenser of an F-16, and programs such as the Defense Advanced Research Projects Agency’s Gremlins have been experimenting with technologies enabling dispatched aerial drones to return to “dock” on the aircraft. Docking and recovering mini-drones, Air Force technological developers explain, is much more complex than simply sending or launching small drones for surveillance and attack missions that cannot be recovered.

Cargo plane-operated recoverable drones, a technology that certainly relies upon higher levels of autonomous navigation, bring a wide swath of improved mission possibilities. These include much longer attack and mission reach because drones can begin missions while in the air much closer to an objective, without having to travel long distances from a ground location or forward operating base. Furthermore, perhaps of even greater significance, air-launched returnable drones can be equipped with more advanced sensor payloads able to conduct reconnaissance or even attack missions.

Kris Osborn is the defense editor for the National Interest. Osborn previously served at the Pentagon as a Highly Qualified Expert with the Office of the Assistant Secretary of the Army—Acquisition, Logistics & Technology. Osborn has also worked as an anchor and on-air military specialist at national TV networks. He has appeared as a guest military expert on Fox News, MSNBC, The Military Channel, and The History Channel. He also has a Master’s Degree in Comparative Literature from Columbia University. This article was first published earlier this year.