Is a Smaller and Faster Marine Corps Also More Lethal? 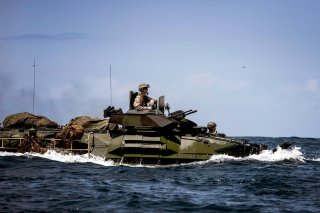 Could fast-maneuvering Marines use lethal anti-armor weapons, dispersed formations, and a large number of networked unmanned systems to exact an effective battlefield effect upon a larger mechanized armored force?

According to what Gen. David Berger, commandant of the United States Marine Corps, recently told Congress, that answer is a resounding yes.

While armor and lethal firepower will not fully disappear from the Marine Corps in the future, the Corps’ new Force Design 2030 strategy document calls for a significant decrease in force size and a substantial reduction in large armored platforms and heavy helicopters, among other things. The new Corps strategy will also completely remove the main battle tank from the service.

In recent remarks before Congress, Berger made specific reference to Ukraine and the way in which a dispersed, fast-moving, dismounted force armed with effective anti-armor weapons has had great success against a larger mechanized Russian force. While discussing the conceptual impetus for Force Design 2030, Berger pointed out that in a modern battlefield, a fast, well-networked, maneuverable force that is easily deployable, expeditionary, and armed with long-range precision weapons can decimate the adversary. To employ this, the future Marine Corps is ditching the tank and instead relying on fast tactical vehicles with highly-lethal anti-armor weapons.

While there is still debate about the need for a larger Corps and the place for large helicopters and even tanks in the service, the large-scale introduction of drones; high-speed, artificial-intelligence-enabled networking, paradigm-changing sensors, and precision weapons have changed the tactical equation in a substantial way.

Berger said as many as nine force-on-force exercises over the past year have confirmed that a smaller, more mobile, and more distributed force can prevail if it has, as he described it, “organic ISR and loitering munitions.” Berger explained that these kinds of formations are actually more lethal than traditional larger units and says these findings are “consistent with what we have seen in Ukraine.”

Sure enough, with modern sensors and long-range weapons, an enemy might be able to attack concentrations of forces or armored vehicles much more easily than had been possible in years past. A concentration of mass or armor offers a more visible and potentially more vulnerable target for an adversary equipped with the ability to see force structures from great distances and long-range precision weapons to attack from stand-off ranges. A more dispersed force is naturally a force that is harder to see and much harder to target.

Armed with drones and sufficient amounts of anti-armor weapons and loitering munitions, a smaller and faster force might also help enable multi-domain operations across the Pacific’s dispersed maritime domain. Indeed, the Corps is now preparing for a new era of “island hopping,” sea-land amphibious warfare operations. In this respect, the Force Design 2030 shows great relevance to the Pacific and other coastal island areas. However, Ukraine is showing that perhaps, if used with tactical proficiency, dispersed forces armed with high-lethal anti-armor weapons can be quite successful against larger concentrated armor formations as well.