Smart Drones: The Army's Autonomous Drones Could Save Lives 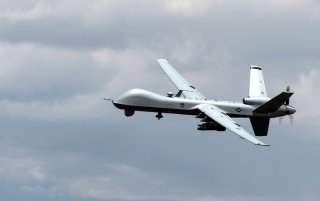 What if, when taking heavy incoming enemy fire, U.S. Army tanks and other armored vehicles were able to launch autonomous drones over the other side of a ridge to find and help destroy fast-approaching enemy forces?  While hand-launched drones certainly exist today, the concept here would be for drones to autonomously launch, fly, land, and adjust to emerging variables to achieve mission success.

This is a paradigm-changing measure of artificial intelligence (AI) machine learning that Army Research Laboratory (ARL) scientists anticipate will shape, inform, and potentially even drive warfare and concepts of operation decades from now.

A group of committed ARL scientists is working on AI-enabled computer algorithms designed to support real-time manned-unmanned machine learning, wherein human input can enable an autonomous drone to essentially learn behaviors in response to certain contingencies. The experimental concept is based upon certain reciprocity, meaning the machine is able to respond to and incorporate critical input from a human.  The ongoing experimentation could be described as an evolution, as AI-capable systems are known to only be as effective as their databases. This can sometimes present a quandary regarding how an AI system might respond if it comes across something that is not part of its database. How quickly can it assimilate and accurately analyze and organize new information that is not part of its database? ARL scientists are fast progressing with this “evolution” by training drones and autonomous systems to respond to and incorporate human input in real-time.

“Our ultimate goal is to have AI that is robust that we can actually use in the field that does not break down when it encounters a new situation. … We are hoping to use this technology to better advance the ways soldiers use that technology and get that technology to adapt to the soldier,” Dr. Nicholas Waytowich, Machine Learning Research Scientist with DEVCOM at the ARL, told the National Interest.

Waytowich showed a cutting-edge video demo in which a drone seeks to autonomously land on a tank, learn new behaviors, and potentially respond to new mission requirements. With the human-machine interface, a concept long inspiring Army thinking about future war, a drone could potentially make time-sensitive, critical adjustments and learn new information instantly.

“I can take control of the drone, and I can fly it with this … but when I'm not controlling it, the AI will be in control. And so I can start off by giving demonstrations. But then also I can let the AI fly—if the AI hasn't learned it perfectly … I can intervene and course correct,” Waytowich explains.

As part of the demonstration, Waytowich showed a drone landing autonomously on a tank while receiving additional critical input and instructions from a human throughout its flight. The idea is not just for the drone to follow human commands but rather to integrate the new information into the drone’s existing database, so the behavior and the mission become known and recognizable. For instance, the drone might receive commands from a soldier regarding images its cameras pick up from beneath its purview. The drone can then file the image and instruction together in its existing “library,” allowing it to perform the tasks autonomously moving forward.

“We have tools to allow humans and AI to work together,” Waytowich said.