Smith and Wesson Shows How to do .22 Pistols the Right Way 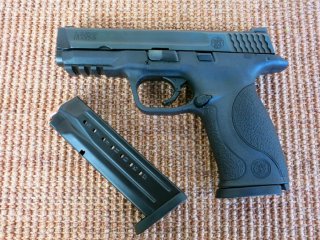 My dad always said the best things in life are shooting guns, cold beer, and the feeling of finishing a hard day's work, not necessarily in that order. I agree with him, but the guns are where it’s at. Especially .22LR, and even more specifically the Smith and Wesson M&P 22.

If you want to know why you should buy an M&P 22, keep on reading because this pistol is no slouch.

By now we’re all familiar with the S&W M&P line for the most part. They’re pretty decent pistols that are still affordable. I can’t hate on that, but I’ll say that the M&P 9 never really caught my attention. There were too many better options out there, for me anyway. 22 caliber pistols are fun though and I’m always willing to give one a shot.

I can say confidently that I think the M&P 22 is one of the better .22 pistols you can snatch up right now. The M&P series always looked super clean. Well mostly, except I thought the grips were always ugly and not of much use. Outside of that, I’m a fan of that boxy look.

Functionally, I mostly take issue with the number of safeties on this thing. It’s too many. I don’t use safeties (usually) on pistols as is. You’ll find one on the rear slide which is the most practical. The internal safety and magazine disconnect safety are entirely unneeded and kind of annoying actually.

Those minor gripes are where the complaints end though. Accuracy is exceptional when it comes to shooting this pistol. My groups were sub-inch at a little under twenty yards and farther targets were still getting some love. Its ease of use and accuracy definitely make it one of those pistols you could use to either train a new shooter or practice the M&P 9/40’s manual of arms.

I’d like to give special attention to the M&P 22’s reliability too. Rimfire pistol is notorious for jamming up even the most prolific of guns. It’s prone to light primer strikes and all-around shoddiness, so it was a breath of fresh air to get a truly reliable .22 pistol. There were zero malfunctions with this gun, even at 1000+ rounds. It effectively removes a lot of my issues with .22 LR guns.

The Smith and Wesson M&P 22 may not be the flashiest or most expensive .22 pistol, but it’s rock solid and brings a lot of really good stuff to the table. You’ll find that it’s an extremely reliable pistol that won’t fail you and you’ll be nailing targets left and right with no problem. If training is your goal, the M&P 22 is invaluable and will have you saving money on ammo. It’ll run you $400, but it’s a great buy anyway. It’s not a flashy hypercar; it’s more like an early 2000s sedan that gets you from point A to point B every time without fail.