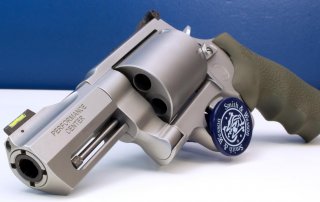 Of all the revolvers on the market, few are like the Smith & Wesson Model 460XVR (Extreme Velocity Revolver). It’s one of the largest caliber handguns out there, with only giants like the S&W 500 registering a higher caliber. When it was released in 2005, there was literally nothing like it on the market. Since then, many companies have developed more powerful and accurate revolvers, but the 460 is a classic and still one of the best.

This gun has a rifle caliber placed inside of a handgun. It packs a punch, to say the least. However, if you aren’t careful it will become inaccurate. You have to clean it and take care of it as you should with any gun, but especially here. If you don’t your accuracy will slip quickly. It comes with adjustable rear sights, but if you plan on using it for big game hunting, I’d suggest adding your own sights on this one. It’ll make a great piece to add with your 30-30 hunting rifle, or whatever else you like to hunt with.

This gun definitely makes up in power and pizazz what it lacks in reliability. I’ve had a few experiences where the casing has gotten stuck in the weapon after shooting and it’s a pain. You also have to be careful with making sure you are cleaning the gun regularly. I don’t own this one so I don’t have to deal with this, but my friend who loaned me it for the review has complained about accuracy slipping if he forgets to clean after shooting. Either remember to take care of it or expect it to slack off a bit.

The XVR standardly has a rubber grip, which I prefer for big game hunting. I like a Hogue grip on my revolvers, and I choose practicality over aesthetics. It’s easy to hold and I like it because of how much firepower is in the XVR. It’s stable and does its job. It fits my hands well and I wouldn’t change anything about the grip.

If I haven’t already mentioned it, this gun is big, strong, and a little intense. Luckily, the trigger is not. It’s a smooth pull and I didn’t experience any problems when I shot with it. The smooth trigger is part of what will make this gun great for big game hunting and use in the field. It’s easy to use and packs a punch. It’s made for the real world.

When you shoot the 460 you can use either .454 Casull and .45 Colt ammunition. I like the .45 cold because it generates less recoil. It’s primarily personal preference but I’m just not trying to deal with excess recoil in my handgun. You also need to know that the 460 is a only a 5 shot revolver.

If I haven’t already made this abundantly clear, this is a big gun. It weighs in at 72 ounces and has a barrel of 8.38 inches. The barrel is larger than some guns. The whole gun is 15 inches long. This massive size is to be expected, this one of the biggest and strongest revolvers on the market. The 460 is impressive, no doubt, but this gun is not for beginners.

This gun does pack a punch. It’s strong, explosive, and powerful. That said, I was a little underwhelmed by the recoil. Compared to the firepower that came out of the barrel, I was expecting my wrist to hurt all afternoon, but the recoil was similar to a 44 Magnum. Considering that the 460 shoots at 2300 feet per second, I was quite surprised.

The 460XVR is one of the top-of-the-line revolvers on the market, and the pricing reflects that. Pricing can be as much as $1400 dollars, maybe more depending on the retailer that you get yours from. That said, if you’re even looking at this gun, you had to see this coming. It’s big and strong, and that strength costs money. If you like high powered revolvers but don’t love the high powered pricing, check out the Colt King Cobra or the Ruger GP100.

Of all the words that come to mind with the 460XVR from Smith & Wesson, “cool” is the word that makes the most sense. It’s cool the way muscle cars are cool. It’s ‘basically’ the muscle car of revolvers. It’s good ole fashioned American muscle. It’s cool, but I wouldn’t make it my top priority to own this gun. There’s also the Performance Center version of the XVR which essentially is the same firearm with smaller dimensions. I’d choose that, or another small revolver like the Taurus 380 or the Chiappa Rhino before I went all in on the most extreme revolver out there. I’m not an extreme guy, but if you are, this revolver was made for you.