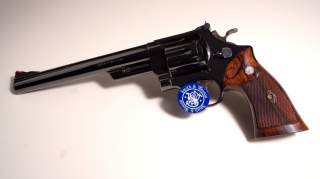 In the first half of the twentieth century, the largest revolver calibers were .45 ACP, used in revolvers such as the M1917 revolver, .45 Colt, a round used in older Colt revolvers, and .44 Special. While all of these bullets exceeded a diameter of .40 inches, they were eclipsed in energy delivered by the .357 Magnum. Although a narrower bullet, the .357 Magnum delivered a very respectable 494 foot pounds of energy, while the .45 ACP delivered 365, the .45 Colt 444, and .44 Special a mere 295 foot pounds. The .44 Special was also significantly slower, at 776 feet per second. All three of the big bore rounds flew at subsonic speeds. The .357 Magnum round, by contrast, broke the sound barrier at 1150 feet per second.