The Sneaky Way Russia Is Increasing Its Military Power 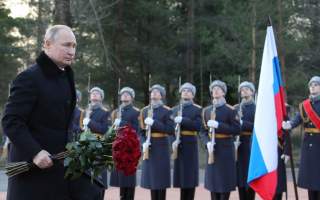 Key Point: Russia doesn't have to build new toys to modernize the ones they already have.

In a recent article for The Strategist, I showed how Russia’s economic woes are negatively affecting plans to modernize the country’s military. In order to be thrifty, Moscow has, for the most part, been investing in modernized or upgraded versions of existing platforms, rather than waiting for altogether new platforms like the Armata tank or PAK-FA fighter to enter service. Most of the Russian Armed Forces’ equipment is of Cold War vintage, and their priority appears to be an increase in the volume of modern equipment in service, rather than introducing revolutionary new capabilities.

Russia’s Deputy Defense Minister said in April 2016 that the military had received some 1,200 “new and modernized aircraft” since 2013—250 new planes, 300 new helicopters and 700 modernized aircraft. Essentially all the new fixed-wing combat aircraft are modern derivatives of 1980s Soviet-era aircraft: the Su-27 ‘Flanker’ (Su-30; Su-35 and Su-33), Su-25 ‘Frogfoot’, MiG-29 ‘Fulcrum’ (including the forthcoming MiG-35) and the MiG-31 ‘Foxhound’. These ‘4th generation’ airframes outfitted with modern, digital avionics and sensors are commonly referred to as 4.5 generation fighters, and lack the intrinsic design features of 5th generation aircraft like the F-35.

Ambitions for a 5th generation Russian fighter, the PAK-FA, have been continually delayed due to high costs and intermittent support from development partner, India. Just eight prototypes of the vaunted aircraft exist today, and the latest plans expect to see just 12 production aircraft acquired by 2020. Production lines for the Su-35 or MiG-35 are likely to benefit from the PAK-FA’s shortcomings, as well as continuing export demand for Russian 4.5 generation fighters.

There’s nothing inherently wrong with that; in fact, it’s a practical and cost-effective plan. The US Navy began transitioning from the 80s-era F/A-18 Hornet to the modern Super Hornet in the early 2000s. Those 4.5 generation fighters are, by all accounts, still very capable and require less development than brand new airframes would. And given that both of the US military’s 5th generation fighter programs have suffered significant setbacks, it’s easy to see why Russia opted for a less risky path, though it’s not without opportunity cost.

Russia’s naval modernization plans have progressed much more slowly. Of the 108 surface combatants in service today, nearly three-quarters are over 25 years old. Efforts to build modern surface combatants have focused on relatively smaller ships: since 2010, 11 corvettes and two frigates have been commissioned, with another 12 corvettes due to enter service by 2019. But Moscow’s interference in Ukraine’s civil war led the Ukrainians to cease exports of vital naval gas turbines to Russia. Of the six frigates in various stages of completion, only three have the turbines they’ll need to operate, creating headaches for the Russian Navy.

Of 20 large surface combatants (destroyer or larger, including the Admiral Kuznetsov carrier/cruiser), only two were commissioned in the latter half of the 90s, and none have been built since. A further three destroyers are being kept in reserve, but if they return to service, they’d likely replace older warships rather than add to the overall size of the fleet.

Likewise, two of the enormous 80s-era Kirov-class ‘battlecruisers’ have been kept in reserve, one of which—the Admiral Nahkimov—is undergoing modernization. By 2020, the Nahkimov will replace the Pyotr Veliky as flagship of the Northern Fleet, while the latter undergoes a period of maintenance and modernisation. A new class of Russian large surface combatant, the ‘Leader class’, is reported to begin construction in the early 2020s, but no contracts have yet been signed.

The submarine fleet is in a similar state, with most vessels dating back to the early 90s.Contemporary submarine construction has focused on an improved version of the 80s-era Kilo-class SSK. The Kilo has been a successful export product for Russia, with 16 of 22 improved Kilos in service with foreign navies. Recent emphasis has shifted to the Yasen-class nuclear submarine, with the second vessel of its class due to be launched this year. As well, the fourth ship of the Borei SSBN class will be launched this year. Both nuclear subs are iterative improvements on earlier ships in their class, resulting in the labels Yasen M-class and Borei II-class respectively.

Recent economic hardships appear to have driven the Russians further toward improved or upgraded platforms rather than the pursuit of entirely new platforms. But there’s no halt in the modernization process, only a course adjustment. If anything, some services may be able to reach their modernization goals even sooner thanks to dependable production lines. And late Cold War-era designs are still sufficiently deadly to be taken seriously, especially when equipped with modern sensors and weapons.

This first appeared in ASPI’s The Strategist here. This piece was first featured in January 2017 and is being republished due to reader's interest.