So You Want A Desert Storm Memorial? 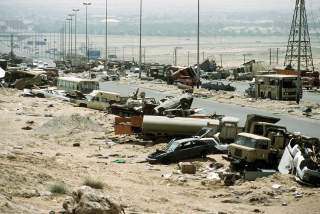 So you want a Desert Storm memorial? Great. Now here’s how to do it.

Make it a building with rows of TV screens playing videos of laser-guided bombs going through windows or ventilation shafts or whatever on loop. There’s also a video of General Norman Schwarzkopf showing “the luckiest man in Iraq.” Maybe some memorabilia from the war, I dunno.

Then, as you exit the building and go outside, you have to walk down a full-scale mock-up of the Highway of Death.

That was my experience. After the cessation of offensive ground combat operations, my unit left our objective and headed towards Basra via Highway 8—soon to be known around the world as “the Highway of Death.”

I was a Cavalry Scout attached to the mortar platoon, driving an M106 mortar carrier. The first vehicle I saw caught my attention. It looked like it had sustained no damage and come to a stop along the curb. The driver had his right hand on the steering wheel and his left arm resting along the door with his elbow slightly outside. Everything looked normal until I noticed what the problem was: His head was gone.

Next, I came across what still haunts me to this day. An Iraqi that had been burnt alive. Kenneth Jarecke photographed the corpse and it was so graphic that media at the time refused to publish it. Twenty-seven years late, I can still picture him clear as day. The look on his face is something I’ll never forget, despite EMDR therapy over the years in trying to do so. The blessing and curse of a photographic memory, I guess. That is the thing that always stuck with me, the looks on their faces. It felt perverse, invasive, to witness their last horrifying moments, frozen on their faces. That’s what war is, not videos of bombs going through windows.

I don’t feel like a memorial is needed. The countless Vietnam veterans who thanked us for shifting the public’s attitudes towards how they were treated is really all the thanks I needed. It felt like that wound had finally healed and I was proud to be a part of that reconciliation.

Scott Almhjell served two years in the Army, from 1990 to 1992. In Operation Desert Storm, he was a cavalry scout with the 24th Infantry Division. He now lives in Scottsdale, AZ.