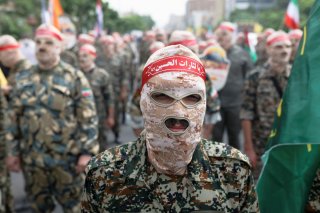 Former U.S president Donald Trump ordered the killing of Iranian general Qassem Soleimani, the leader of the overseas arm of the Islamic Revolutionary Guard Corps (IRGC), by a drone strike on January 3, 2020. At the time of the attack, many observers believed that the killing violated international law, but U.S officials responded that Soleimani was a “legitimate military target.” This followed two other consequential decisions by the Trump administration: In 2019, the White House added the IRGC to the State Department’s Foreign Terrorist Organizations (FTO) list. A year before that, Trump had withdrawn the United States from the Joint Comprehensive Plan of Action (JCPOA), commonly known as the Iran nuclear deal, and had imposed crippling sanctions in an effort to exert a “maximum pressure” campaign against Iran.

Trump’s decisions rapidly escalated tensions between Iran and the United States, and the risk of a military confrontation grew. Yet, despite some retaliatory actions by Iran and its Shia militias in the Middle East against U.S. interests, war was not forthcoming. However, Iranian security and military officials have never forgotten Soleimani’s fate nor forgiven the United States for his assassination—in fact, they remain committed to seeking vengeance.

In January 2022, the Khamenei shared a 3D animated video on his official website depicting Trump’s assassination on the Mar-a-Lago golf course. The video sent a clear message to U.S. officials that the Islamic Republic remains committed to exacting its revenge.

“The former U.S. President Donald Trump must face trial for the killing, or Tehran would take revenge … If Trump and (former secretary of state Mike) Pompeo are not tried in a fair court for the criminal act of assassinating General Soleimani, Muslims will take our martyr’s revenge,” Iranian president Ebrahim Raisi said on the second anniversary of Soleimani’s assassination.

In recent months, the U.S government extended Diplomatic Security Service protection to Trump and Pompeo in response to Iranian threats. Pompeo and Brian Hook, the State Department’s former special envoy for Iran, led the Trump administration’s “maximum pressure” campaign against Iran, and the report says that U.S. intelligence has determined that the threats against them have remained consistent since they left government and could intensify.

According to some reports, the IRGC is planning a revenge operation on U.S. soil. In May 2022, the Washington Examiner, citing a Justice Department official with direct knowledge of the situation, reported that at least two Iranians belonging to the IRGC have been plotting to assassinate former national security adviser John Bolton.

The source told the Washington Examiner that the department possesses indictable evidence against the Iranians. However, U.S officials are resisting indicting the men due to the possibility that it could derail their drive to revive the nuclear deal with Iran. Some analysts believe that the Biden administration want to renegotiate a new nuclear deal with Iran and keep the Iranian diplomats at the table no matter what the cost.

In regard to the talks themselves, some subjects beyond the JCPOA could damage the possibility of any progress. For instance, while Iranian and U.S officials have emphasized that the exchange of prisoners and the Iran nuclear talks are two separate issues, there is no doubt that the two cases have been linked. Recently, U.S secretary of state Antony Blinken urged Iran to release an American citizen, Emad Sharghi, whom Blinken said has been held for years as a “political pawn.”

Also, Iran had offered to return to its nuclear commitments under the JCPOA if the United States removed the IRGC from its FTO list. According to reports, Washington accepted this offer on the condition that the IRGC’s pledge to not seek retribution for the Soleimani assassination, which Tehran refused.

In April 2022, the naval force commander of IRGC stated that Washington had requested multiple times that Tehran abandon plans to retaliate against the United States for the assassination of Soleimani. “Perpetrators, officials, accomplices, and advisers in the dastardly act will not go unpunished … these people must be brought to justice,” Rear Admiral Ali Reza Tangsiri said.

With the growth of this extremist rhetoric by Iranian military officials, there is a little chance that the Islamic Republic will not pursue recourse for Soleimani’s assassination. However, the attempted assassination of U.S. citizens in America by a foreign power constitutes an act of war, and the Biden administration clearly cannot delist the IRGC from the FTO list if the group is planning a retaliatory operation on U.S. soil.