Solving a Mystery: How the Moon Formed 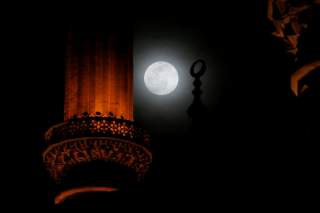 How the Earth got its moon is a long debated question. The giant impact theory – which states that the Moon formed from the a collision between the early Earth and a rocky body called Theia – has become the front runner among the explanations. But the details around how this happened are blurry and there are many observations that scientists are still struggling to explain.

Now a new study, published in Nature Geoscience, has shed light on what actually happened by solving one of the biggest mysteries surrounding the crash – why the Moon ended up being nearly identical to Earth, rather than Theia, assuming she existed.

According to the giant impact theory, Theia was a body roughly the size of Mars or smaller – half the diameter of Earth. It smashed into the developing Earth 4.5 billion years ago. This collision produced enough heat to create magma oceans and ejected a lot of debris into orbit around the Earth, which subsequently coalesced into the Moon.

The theory explains the way and the speed which the Earth and Moon spin around each other. They are tidally locked, which means that the Moon always shows the same side towards Earth as it spins around it. This is why it was such an achievement when the Chinese landed their Chang'e 4 spacecraft on the far side of the Moon in 2019 – direct communications with that side are never possible from Earth.

The Moon and the Earth are nearly identical in composition. The differences are that the Moon has less iron and less of the lighter elements such a hydrogen, which are needed to produce water. The giant impact theory explains why. The heavy element iron would have been retained on Earth. And the heat produced during the impact and the ejection into space would have boiled the lighter elements off while the rest of the material of Earth and Theia would have mixed.

Computer models have reproduced the events that led to the formation of the Moon. The models that best fit all of the observations suggest that the Moon should be composed by approximately 80% from the material originating from Theia. So why is the Moon instead suspiciously similar to Earth?

One explanation is that Theia and the early Earth must have had an identical composition to start with. That seems unlikely because every documented planetary body in our solar system has their own unique composition, with slight differences reflecting the distance from the sun where a body formed.

Another explanation is that the mixing of the two bodies was much more thorough than anticipated, leaving a less clear signature of Theia in the Moon. But that is also unlikely, as it would require a much larger impact than the one that actually took place.

The new study resolves this dilemma by showing that the Earth and the Moon aren’t as similar as previously thought. The researchers looked with very high precision at the distribution of isotopes of the element oxygen in rocks returned from the Moon by the Apollo astronauts. In chemistry, any element’s atomic nucleus is made up of particles known as protons and neutrons; isotopes of an element have the same number of protons in the nucleus as the regular version, but different numbers of neutrons. In this case, oxygen’s isotope, O-18, which has eight protons and ten neutrons, is slightly heavier than the much more common than O-16, with its eight protons and eight neutrons.

The study shows that there is a small difference between the Earth and the Moon in their oxygen isotope composition – their profiles aren’t identical after all. What is more, the difference increases when you look at rocks from the Moon’s mantle, which is a layer below the surface or crust – having more lighter oxygen isotopes than the Earth. This is important. The crust is where mixed debris would have ended up, whereas the deep interior would have more bits of Theia.

So Theia and Earth weren’t identical, and the Moon and the Earth aren’t identical either. But the results also teach us a bit more about Theia itself.

Because of gravity, one may expect slightly more of the heavier isotopes closer to the Sun. Compared to Earth, Theia must have had more of the lighter oxygen isotopes, which suggests that it would have formed further away from the Sun than the Earth.

With the results from this study the giant impact theory has crossed another hurdle in explaining the formation of our Moon, and we have learned a little more about Theia itself on the way.