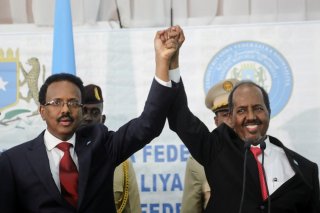 The Somali government announced on Sunday that Hassan Sheikh Mohamud, Somalia’s president from 2012 to 2017, had been elected to his former office—potentially ending a year-long crisis that saw escalating violence between all factions within the war-torn country.

Mohamud was chosen with roughly 165 parliamentary votes, edging out the incumbent president, Mohamed Abdullahi Mohamed, also known as “Farmaajo,” and thirty-four other candidates. Although Mogadishu, Somalia’s capital, had been placed under a curfew at the onset of the election, the new president’s supporters came out onto the streets after the decision was announced, cheering and engaging in celebratory gunfire.

The country’s election, initially scheduled for early 2021, was delayed for more than a year over security concerns in the capital. Although the incumbent president’s term was scheduled to end in February 2021, he remained in office during the delay—a circumstance that many in Somalia’s opposition argued to be unacceptable. Fears also circulated in the run-up to the vote that he might refuse to recognize the result and attempt to retain his position. However, Farmaajo conceded defeat after the election results were announced, and Mohamud was immediately sworn into office.

In his acceptance speech—made from Mogadishu’s airport, one of the city’s safest places due to the presence of African Union troops—Mohamud urged reconciliation between all sides and an end to the conflict. He called Farmaajo’s willingness to step down and attend the inauguration speech “commendable,” adding that Somalia needed “no … grudges [and] no avenging.” In turn, Farmaajo promised loyalty to Mohamud and urged Somalis to “pray for the new president.”

Somalia’s unusual election process does not involve direct voting by Somali citizens. Instead, Somali state legislatures and clans elect local delegates who choose the president—a system akin to the United States’ Electoral College, although the electors have real power in the decision.

A sixty-six-year-old member of Somalia’s large Hawiye clan, Mohamud was known prior to political service as a civic leader and one of the founders of SIMAD University. The new president’s challenges are likely to include dealing with Al-Shabaab, Al-Qaeda’s ultraviolent affiliate branch within Somalia, as well as managing one of the country’s worst droughts in modern history and preventing a famine. A similar famine in 2011 took the lives of an estimated 250,000 Somalis, the overwhelming majority of them children, and the United Nations has warned that the current famine could have equally catastrophic consequences if immediate action is not taken.