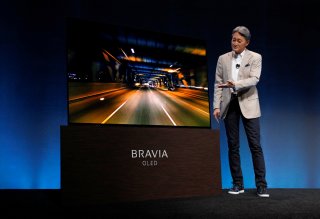 The next generation of TV technology is here, with Sony’s launch of the QD OLED TV. The first two were unveiled at CES in January, one from Samsung and the other from Sony, although both use Samsung Display’s panels.

The Samsung version, the SB95, has earned stellar reviews, with RTINGS ranking it the top TV currently available on the market, ahead of this year’s LG OLED models. Now, reviews have begun to appear of the A95K, the Sony QD-OLED TV.

In a review that appeared Friday, IGN said that the Sony A95K lived up to the hype that has been generated about it. “What Sony has produced here actually lives up to the hype, and the A95K is easily the most impressive 4K television I’ve seen this year across a variety of metrics. Not only is the QD-OLED panel exceptional, but the entire package Sony built around it matches that quality standard with just a small number of caveats,” the review said.

The conclusion was just as rapturous. “Sony’s A95K is the best-looking television I’ve ever seen both from an aesthetic and picture quality standpoint. The television looks stunning in a living room even when powered off and will beg to be enjoyed the second it turns on. This magnificent display is a first look at the future of display technology, and it is one that is both literally and figuratively bright.”

In mid-June, PCMag also reviewed the A95K, calling it "a powerful OLED TV with very wide colors, strong contrast, and excellent features, though its quantum dot layer prevents it from getting as dark as an OLED should.” The review praised the TV’s color range, its Google TV interface, and its "crisp, actuator-based sound system with speaker wire inputs,” while listed “cons” included that “colors aren't as accurate as some competing OLED TVs” and “quantum dot layer compromises the perfect black levels OLEDs should provide.”

The magazine rated it four stars out of five, although it recommended LG’s C2 ahead of it. “The Sony A95K is a striking, vivid OLED TV with plenty of features that benefits from both the Google TV platform and support for Apple AirPlay 2,” the review said. “It offers a wider color range than any previous model in its lineup, though those colors aren’t quite as accurate as on the LG C2 or Samsung S95B. The TV also, unfortunately, shares the S95B’s issue with ambient light due to its quantum dot layer.”

Back in March, Digital Trends called the A95K “a quantum leap for OLED,” and gave it five stars. “It’s been my prediction that QD-OLED technology alone is so next-level that it will change the TV game in 2022. Knowing that Sony has built a TV around this tech has given me enough confidence to predict the A95K will be one of the highest-performing TVs of the year, if not the hottest TV of 2022.”