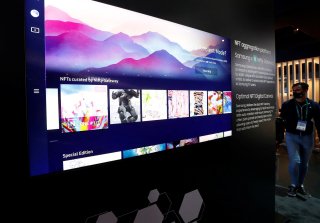 Watchers of the international TV market have been anticipating the arrival of QD-OLED for the last two years. QD-OLED is a new format of television being developed by Samsung Display. The Dong-A Ilbo reported in December that Samsung Display began mass production of the panels for the TVs, with the first units expected to arrive in 2022.

It’s long been assumed that Samsung Display’s panels would be used in TVs made by Samsung Electronics, and also be sold to other manufacturers. Now, with the Consumer Electronics Show getting underway, we know that’s the case.

The Verge reported Tuesday that Sony announced the Bravia XR A95K TV, which will be the first TV on the market using a Samsung Display QD-OLED panel. The 4K TV will come in sixty-five-inch and fifty-five-inch sizes.

Sony’s earlier OLED TVs used LG Display panels. Most of its OLED lineup this year will continue to do so, including the A90K and A80K models.

Meanwhile, CNET noticed that Samsung’s own QD-OLED-equipped TV has surfaced. Samsung did not announce the new TV, but it received a CES 2022 Innovation Award. Samsung is calling the product a QD-Display TV.

“Samsung’s 65” QD-Display TV is the world’s first true RGB self-emitting Quantum Dot OLED display—revolutionizing TV by combining the contrast levels of RGB OLED with the color and brightness of quantum dots for ultimate visuals,” the award description says. “With impeccable visuals, sound, and speed, the QD-Display TV represents the next frontier in home entertainment.”

An unnamed Samsung spokesman said more information about its 2022 TV lineup will be released in coming weeks. Several Samsung TVs for this year had been announced earlier in the week, although the QD-OLED model had not been.

Samsung had not used OLED panels for several, instead using QLED panels. Reports in recent weeks have stated that Samsung agreed to purchase some OLED panels from LG Display, although there doesn’t appear to be any hint in Samsung’s CES announcements so far of such TVs.

PC Mag, meanwhile, reported that it got a look at the new QD-Display technology during a recent visit to Samsung’s offices in San Jose.

"Initially, we noticed little difference,” the magazine’s report said. "That’s because all three 65-inch TVs offered top-notch visuals. However, Samsung’s product began to stand out once we spotted the technology squeezing out more light and richer details across the televised images.”