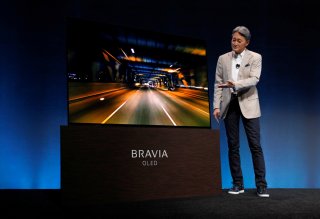 In January, Sony unveiled its 2022 TV models, and the company surprised audiences by showcasing a QD-OLED TV before Samsung—the company whose display arm developed that technology—got a chance to.

Now, Sony has announced pricing and availability for that TV and others in its lineup for the year. The QD-OLED TVs are officially known as the Bravia XR Master Series A95K OLED TVs. They come in fifty-five- and sixty-five-inch sizes, which are priced at $2,999.99 and $3,999.99, respectively. Both will be available to pre-order in June. Sony is also offering the A80K and X90K products.

“The highly anticipated TV lineup will be powered by Sony's best-in-class processors, including Cognitive Processor XR, the brain of Sony's new BRAVIA XR televisions. Designed to replicate the way humans think and respond, this revolutionary TV processing technology delivers stunning contrast and vibrant colors, bringing astounding realism to anything onscreen,” the company said in their release.

The Sony TVs will be available at Amazon, Best Buy, and other stores.

Samsung’s first QD-OLED TV, the S95B, is available on the market now. Meanwhile, reports over the weekend stated that new sizes for Samsung’s models will arrive next year.

“Samsung Display's current monthly production capacity is 30,000 substrates that can be cut into about 1.8 million 55- and 65-inch QD-OLED TV panels annually at 100% yield, meaning that 100% of the panels can be sold – and that costs can be reduced,” Flat Panels HD reported. “Samsung Display recently said that it has exceeded 75% yield. It is targeting 80% yield this quarter and 90% in the second half of the year.”

TechRadar recently reported that costs are expected to drop for QD-OLED TVs in the near future. That’s because Samsung Display’s production yield for the TVs has improved dramatically.

“If true, and if Samsung Display can continue to improve its efficiency even further, then we might see QD-OLED displays drop in price significantly come 2023. We could even see some amazing Black Friday deals announced later this year,” the report said.