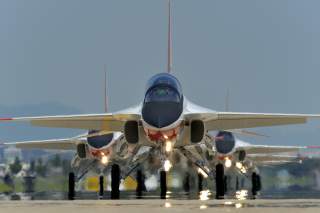 In September 2018, the Air Force will choose from one of three advanced jet trainers for the T-X competition, a major defense program to purchase 350 jet trainers that will serve well into the middle of the twenty-first century. Boeing, Saab, Lockheed, Korean firm KAI, and the Italian firm Leonardo all have a horse in the race.

The T-X is intended to replace the Air Force's aging fleet of over 430 sleek T-38 Talon jets that since 1961 have trained over 60,000 U.S. combat pilots since. Capable of supersonic flight and partially upgraded with modern avionics and, advanced jet trainers are used to teach pilots how to fly. After graduating from Primary Flight Training with over 100 hours of experience on T-6 Texan II turboprops, graduates destined to fly fighter and attack planes transition to T-38s to learn more advanced skills on an easy handling jet before specializing in a combat-capable warplane. (Tanker and transport pilots study instead on the twin-engine T-1A Jayhawk.)

However, the sheer age of the T-38s means many of their parts—such as wings and landing gear—are at risk of breaking down, and operational availability rates are as low as 60 percent. The Talons also lack many instruments and capabilities that are standard on modern fighters. This means that trainees must spend more training hours flying actual jet fighters, which cost between two to five times as much per flight hour as a T-38. By one calculation, a Talon costs $9,300 per hour flown compared to $22,000 for an F-16C, the least expensive-to-operate Air Force fighter.

Furthermore, the Air Force noted twelve significant capability shortfalls in the T-38 which the T-X trainer must redress, including in-flight refueling capability, compatibility with night-vision goggles for night-operations, and de-icing support for all-weather operations. It also must consume at least 10 percent less fuel and be capable of taking off from shorter 8,000-foot runways.

Initially, the T-X was also considered for a potential secondary light attack role, though the need for jet trainers is so pressing that the Air Force decided not to spread its resources out. Nonetheless, the ability to carry external targeting and weapons pods for simulated weapons release is also desired.

The air warfare branch also wants the T-X to be capable of more strenuous aerial maneuvers than the Talon, including ability to sustain turns while pulling 6.5 to 7.5 times the regular force of gravity (modern U.S. fighters can withstand 9 Gs), and angles of attack over 20 to 25 degrees above the vector of the plane. The more difficult air combat maneuvers the T-X can perform, the less time trainees have to spend flying an expensive and less forgiving fighter jet to practice them.

Most importantly, the Pentagon wants the new trainers to come with advanced, data-linked ground-based simulators that will be able to network with actual flying aircraft for joint exercises and simulate air-to-air engagements or weapons release for air-to-ground missions. The simulators will take on a higher percentage of necessary flying hours to save costs and thus increase training resource availability. This is vital as, by one estimate, each fighter pilot costs the Air Force $2.5 million to train, and there is currently a shortage of qualified combat pilots.

Therefore, keeping airframe and training costs low is vital for the T-X competition, and has led firms including Grumman, Northrop, Raytheon and BAE to drop out of the T-X competition, because they were skeptical that they could turn a profit. The Air Force has particularly emphasized minimizing the risk of cost overruns and technical deficiencies, considerations that favor an off-the-shelf design.

The Italian firm Leonardo is offering the T-100, a variant of its M-346 Master transonic jet trainer, a proven design with roughly seventy in service with the Air Forces of Italy, Israel, Poland and Singapore. (Russia also operates a Yak-130 trainer that is similar due to shared design heritage.) Leonardo emphasizes the T-100 already has an Embedded Tactical Training Simulator developed by CAE, and that Israeli F-35 stealth jet pilots are training on M-346s.

The T-100 is likely the least expensive of the three contenders, estimated to come at around $25 million per plane. However, the M-346’s F124 turbofan engine lacks an afterburner, limiting its top speed in level flight to 658 miles per hour, just under the speed of sound and short of the performance parameters specified by the Air Force. Though manufacture of the M-346 would take place with Leonardo’s DRS subsidiary in Alabama, the fact that the lead company is foreign and that two U.S. partners have already withdrawn from partnerships suggest the M-346’s odds are low.

Lockheed is boosting a modified advanced trainer it helped South Korean firm KAI develop back in 2002 using design DNA from the F-16. The T-50 Golden Eagle already serves in five air forces and has been developed into the TA-50 trainer/attack plane and the FA-50 light fighter, which has seen combat in the Philippines. The T-50A Lockheed and KAI are offering to the U.S. Air Force also has an added refueling probe and revised cockpit displays. Lockheed is the manufacturer of the F-35 stealth fighter, and boasts that T-50A will feature a similar design, making it ideal for preparing future F-35 pilots. A simulator has also been developed, which includes the ability to make bogeys appear on the T-50’s radar to simulate mock air battles.

The T-50 may also be the aircraft that most exceeds T-X performance parameters, having demonstrated an ability to perform sustained 7.5-G turns, achieve angles of attack as high as 25 degrees, and rocket to a maximum speed of 1,000 miles per hour. If the T-50A is selected, production would take place in Greenville, South Carolina.

Boeing is the only remaining contender to have developed a clean-sheet design with assistance from Saab called the T-X—at a rumored cost of $1 billion or more. After a remarkably short two to three-year development cycle, Boeing rolled out two T-X prototypes in 2016 using advanced design technologies and composite materials. The type uses the same F404 after-burning turbofan found in the T-50.

The Boeing T-X appears to be larger than the T-100 and T-50A, has a twin tail for improved maneuverability and other design elements inherited from the Super Hornet fighter, and a staggered tandem seating arrangement for better visibility for the backseater. The T-X is also designed for easy and rapid maintenance, with the engine or ejection seat designed to be swapped out in an hour or less. Boeing has been cagey about exact performance specifications—one site lists 808 miles per hour—but boasts that it is the only aircraft purpose designed to fulfill the T-X competition requirements. This is true, though Boeing’s claim that this makes the clean sheet design less risky is dubious. Boeing has also developed a ground-based simulator, and would produce the T-X in St. Louis, Missouri.

All three aircraft appear to be good designs, while presenting the Air Force a full spectrum of performance thresholds. Of the three competitors, the T-50A and the Boeing T-X are seen as front-runners, with Lockheed possibly a slight favorite due to the maturity of the T-50. However, some aspects of the competing aircraft such as the quality of the respective flight simulator suites may be difficult to evaluate from afar. Deciding factors may also come down to price and possible pressure for economic nationalism.

Whichever aircraft is selected by the U.S. Air Force will remain in service well into the mid-twenty-first century and will likely be favored with additional export opportunities abroad.