Sorry, Bernie: Socialism Should Stay In the Trash Bin Of History 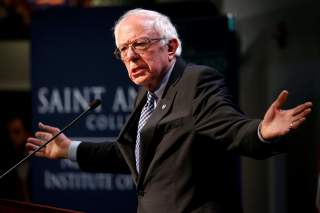 It seems that Sen. Bernie Sanders can always find a way to look at the bright side of a communist dictatorship.

In a CNN town hall last week, Sanders doubled down on his praise of the Castro regime in Cuba, then said:  “China is an authoritarian country, becoming more and more authoritarian. But can anyone deny—the facts are clear—that they have taken more people out of extreme poverty than any country in history?”

For a man so critical of the United States, it’s amazing how far Sanders, a self-described democratic socialist, will go to make excuses for brutal dictatorships.

Still, is there any merit to the idea that China has lifted more people out of poverty than any other country in history?

Certainly, China has made enormous economic gains in the past half-century. But those successes have to be put in perspective.

Much of the success that China has had in recent decades, at least economically, can be attributed to backing away from the socialist ideas Sanders espouses.

Anthony Kim, editor of The Heritage Foundation’s annual Index of Economic Freedom, explained how the Chinese economy has grown in spite—rather than because—of its communist government. It’s mostly due to the regime easing up on its most onerous controls over the nation’s economy.

“The case of China provides clear evidence of the power of free-market policies that Bernie has been trying to discredit,” Kim wrote in an email to The Daily Signal, adding:

To be crystal clear, China’s economic growth has not been stemming from the Communist Party and its socialist command-and-control economy. Rather, it is despite the presence of them. China had gradually embraced a range of non-socialist economic policies.

China abandoned its Maoist economic dogmas in the late 1970s by allowing limited private property rights to farmers, for instance, as well as other more free-market reforms, including wider trade with other nations.

Again, it was the departure from strict socialist doctrines that enabled growth to take place.

Chinese consumers and entrepreneurs, he says, not the massive tax increases and regulatory programs that Sanders peddles, spurred the transformation.

The problem for China in the long term is that it is still generally unfree. Heritage’s Index of Economic Freedom ranks China as the world’s 100th-freest nation out of 180 countries in its 2019 rankings. The index measures categories such as the rule of law, the size of government, regulatory efficiency, and open markets.

Though China’s economic gains in recent decades have been impressive, it’s nonetheless important to keep in mind what its system really is; namely, one based on communist authoritarianism.

The communist government allows some economic freedoms, but then it smashes basic rights to speak and protest while keeping close tabs on its citizens through Orwellian monitoring mechanisms, such as the social credit score, and at the same time cracking down on religious liberty and putting religious minorities into concentration camps.

The Washington Post recently highlighted how many large multinational companies that rely on manufacturing in China, such as Nike and Apple, have been supplied with forced labor by Uighur Muslims from the Xinjiang region.

In the end, slavery couldn’t endure in an America founded on, and committed to, the idea that all men are created equal and are endowed by their creator with inalienable rights.

That profound ethos has unleashed prosperity for Americans, who have the right to pursue happiness secured by a limited government still bound to the rule of law by the Constitution.

Needless to say, communism has no place for God-given rights or limitations on governmental power. The regime decides who is equal and who may be deemed more equal than others.

Yes, in China you may be able to make a buck—as long as you have the government’s blessing. But you are certainly not free and could never expect to enjoy a concept such as equal opportunity in the eyes of the law.

In communist China, your wealth always will be at the mercy of the whims of the authorities. This is a far cry from the American system, in which property rights are ensured and the state largely remains circumscribed from wielding arbitrary power.

Contrary to Sanders’ claims, China has not lifted a billion people out of extreme poverty. The Chinese people have, in many cases, lifted themselves out of poverty, despite the ever-present threat that authorities will take the fruits of their labor away.

Yet, the Vermont senator continues to cobble together reasons to offer the Chinese communists’ system praise, despite nods to their obvious authoritarianism.

That shouldn’t surprise us.

Sanders favorably compared the Soviet communist system with the U.S. capitalist system while on his honeymoon in the USSR in 1988, when the Soviet Union was on the brink of collapse.

Notably, this was long after the world became aware of the Soviet Union’s vast gulag network of prisons and labor camps, but shortly before the entire—let’s call it what it was—evil empire completely imploded due to the rot at the heart of the system.

When wretched socialist regimes collapse, Sanders is long on excuses and short on answers, and does what he can to put lipstick on a pig.

The bottom line is this: Those who continue to insist that socialism is an improvement on our free economy were on the wrong side of the Cold War.

It’s time we do more to understand why our system has succeeded, rather than wait for a kinder, gentler socialist “utopia” that will never come.