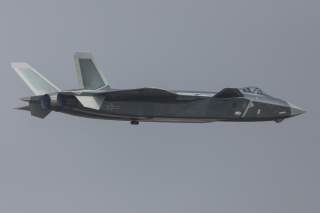 Michael Raska, an assistant professor at Singapore’s S. Rajaratnam School of International Studies, was quoted as saying in the article. “Among the issues,” Reuters noted, “China’s J-20 and J-31 stealth fighters cannot super-cruise, or fly at supersonic speeds like their closest rivals, Lockheed Martin’s F-22 and F-35 stealth planes, without using afterburners.”