Sorry, Donald Trump: The F-35 Stealth Fighter Is Not Invisible 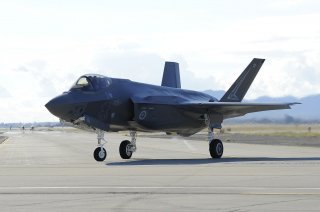 There is no denying that President Donald Trump routinely goes off script and unlike many seasoned politicians he lacks the usual “filter” that we’ve come to expect from our elected officials. It is clear as we head to Election Day that a lot of his supports love him for it, yet there are times when he’s made a few cringe-worthy statements about the capabilities of some of America’s military hardware.

The president infamously claimed his administration invested $2.5 trillion in military equipment—when the actual costs were about 20 percent of that figure.

Another—and notably dubious—claim from Trump is that the F-35 Joint Strike Fighter is invisible. Were he to have said it one time it could be accepted as an “off-the-cuff” remark no different from President Barack Obama’s declaration that the United States built the "intercontinental railroad," when he clearly meant "transcontinental railroad."

However, Trump has made the statement about the F-35’s invisibility multiple times Task & Purpose has reported. This included an Oct. 3, 2017, statement when he said, “we’re ordering hundreds of millions of dollars of new airplanes for the Air Force, especially the F-35. Do you like the F-35? I said how does it do it in fights, and how do they do in fights with the F-35. He says we do very well, you can’t see it. Literally you can’t see. It’s hard to fight a plane you can’t see, right? But that’s an expensive plane you can’t see.”

Just six weeks later he doubled down by stating, “I was asking the Air Force guys, I said, how good is this plane? They said, well, sir, you can’t see it. I said, yeah, but in a fight—you know, a fight—like I watch in the movies—they fight, they’re fighting. How good is this? They say, well, it wins every time because the enemy cannot see it. Even if it’s right next to it, it can’t see it. I said, that helps.”

On other occasions, he apparently assumed “stealth” meant “invisible” as he had declared, “That beautiful F-35. It’s stealth. You cannot see it;” and later “It’s very tough to beat a plane when you can’t see it.”

Now in Trump’s defense, as reported by The Drive/The War Zone, he met with Lockheed Martin’s Marillyn Hewson, who serves as executive chairman and was at the time of the meeting president and chief executive officer for the defense contractor; and she supported the claims.

Trump stated, “We buy billions and billions dollars worth of that beautiful F-35. It’s stealth, you cannot see it. Is that correct?” To which she responded, “That’s correct Mr. President.”

Trump then followed up by saying, “Better be correct, right?” Hewson then confirmed, “Absolutely.”

Now no one expects the president of the United States to know the intricate details of every weapon platform—unless you expect the POTUS to be akin to Dan Aykroyd’s satirical take on President Jimmy Carter on Saturday Night Live, who demonstrated a knowledge of an automatic letter sorting machine.

Yet, as Popular Mechanics reported, it is doubtful the president actually thinks the F-35 Joint Strike Fighter is in fact invisible to the naked eye and Trump is probably referring to its radar signature. However, he never says the word radar, which only adds to the confusion. Moreover, stealth technology doesn’t render aircraft invisible to radar either, it just makes the planes that much harder to see—or could be mistaken for something like a bird at a distance.

In wargames conducted last year, the fifth-generation F-35 jet was able to utilize its stealth capabilities along with long-range sensors and weapons to “kill” enemy aircraft successfully. Efforts are also being made to develop other stealth aircraft and even stealth warships—and perhaps if the president were to actually see one he’d understand they aren’t actually invisible.