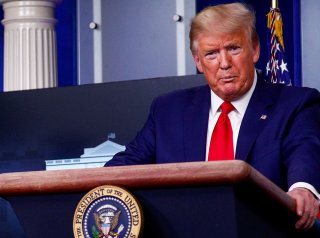 When Donald Trump was running for president, he cultivated a tough-guy persona: tough on immigration, tough on crime and tough on America’s adversaries.

He never admitted having made a single mistake, nor did he ever apologize. Question him and face his wrath.

He demanded that state governors show him personal appreciation before requesting masks and ventilators. When a reporter asked what he would say to Americans who were scared by the virus, Trump retorted that the question was “nasty” and that the journalist was “terrible.” And when asked if there would be enough ventilators for patients who needed them, he simply sneered, “Don’t be a cutie pie.”

Many Americans may have become accustomed to – or have even reveled in – Trump’s penchant for cruel digs, bellicose rhetoric and self-absorption. His supporters see him as someone who’s in their corner, excoriating political opponents and fighting on their behalf.

But a virus is a different sort of enemy. It doesn’t discriminate between who’s tough and who isn’t. You can’t threaten it, humiliate it or dispatch it with a drone strike.

And if history is any guide, Americans will want more than one-note tough guys to lead them through the pandemic. We saw this play out during the Great Depression, when a certain sort of cultural archetype fell out of favor – and a different one emerged.

During his 1928 campaign, Herbert Hoover described America as “challenged with a peacetime choice between the American system of rugged individualism and a European philosophy of diametrically opposed doctrines – doctrines of paternalism and state socialism.”

Like Warren Harding and Calvin Coolidge before him, Hoover didn’t believe that it was the job of the federal government to support the needy. Depending on yourself – not the government – was cast as patriotic and courageous.

In keeping with the times, popular literature of the 1920s showcased bold individualists. Through much of the decade, the most popular pulp-fiction hero was Carroll John Daly’s Race Williams.

Embodying these rugged, cowboy archetypes, Williams frequented the back alleys and tenements of New York City, never hesitating and never missing a shot. He was a good guy, but bombastic and relatively one-dimensional – no weaknesses, no fears, no personal problems.

In the wake of the 1929 stock market crash, economic desperation and disillusion became a broadly American experience. What shell shock was to the soldiers returning from World War I, unemployment and economic insecurity were to the middle and working classes. And as I explain in my book “Detectives in the Shadows: A Hard-Boiled History,” the American public no longer yearned for fearless and invulnerable characters who glided above the worries of the world.

They already had that in Herbert Hoover and in an oblivious top 1%, whose share of national income went from 12% in 1919 to 34% in 1929. Two years into the crisis, Americans who hoped a callous president might turn compassionate were disappointed: Hoover doubled down on his opposition to government aid, stating that “No governmental action, no economic doctrine, no economic plan or project can replace that God-imposed responsibility of the individual man and woman to their neighbors.”

As Hoover’s popularity started to decline, so did Race Williams’.

Replacing him as the most popular pulp fiction detective was Dashiell Hammett’s Continental Op, a hardworking detective who appeared in the novels “Red Harvest” and “The Dain Curse” and in dozens of short stories.

Rather than being blithely indestructible, the Op was nameless, unpretentious and empathetic. Unlike Race Williams, who praised himself and reminded readers that his shots never missed, the Op was much less facile and camera-ready. Overweight, overworked and middle-aged, he paused to think and to talk with others. When surrounded by death and corruption, he worried that it was “getting to him.” He showed that just making it through the day – with some combination of resilience and denial – was the way of the world, the way of all people.

That sentiment was particularly sustaining during the Depression, when alarming circumstances remained beyond individual control. At that time in American history, the Op’s no-nonsense understanding of desperation gained a new and enhanced currency.

A middle-aged hero who did society’s dirty work on very little sleep, who showed up whether he wanted to or not, seemingly indifferent to solitude and the absence of support, and yet willing to pursue the rich and hold their feet to the fire – this wasn’t a person whose life Americans envied, but someone they wanted on their side.

As it turned out, in the throes of the Depression, it was the sort of person more and more Americans were forced to be. Finally, it was the sort of person American wanted as president. In 1932, Americans elected – with 472 electoral votes – Franklin Delano Roosevelt, who promised to shoulder the task of improving the country’s economic fortunes. Like the Op, he was prepared to “speak the truth, the whole truth, frankly and boldly.” And he understood that the government could help people navigate pain and turmoil.

Even before the days of social distancing and empty supermarket shelves, Trump’s harsh indifference to others cast a heavy shadow. As the nation faces a worsening pandemic and what promises to be the gravest economic downturn since the Great Depression, aggression and egotism cannot carry a nation. Indeed, it is negligence, and many Americans are starved for a leader who sees them.

It’s no wonder that New York Gov. Andrew Cuomo, sharing his own experience with loneliness and acknowledging that this is as much a social crisis as a health crisis, has gained such a large following. Leaders in times of real crisis have to know how to serve – to combine everyday vulnerability with exceptional resilience.

It’s not enough to have a made-for-TV tough guy. As literature and history have shown, a fully rounded human and worker among workers – able to tolerate discomfort and put others first – is the leader we need.Susanna Lee is the author of:

Detectives in the Shadows: A Hard-Boiled History.