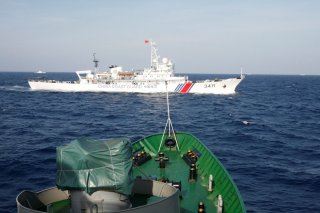 Fire and water are juxtaposed in the phraseology of elements, but Robert Kaplan’s book Asia's Cauldron: The South China Sea and the End of a Stable Pacific alludes to how a large water body is now a simmering cauldron. If modern-day geopolitical advantages are said to be shaped by three things, trade, natural resources, and supply chains, then all those three aspects are epitomized by who controls the South China Sea.

In terms of natural resources, the South China Sea has 11 billion barrels of oil, around 190 trillion feet of natural gas, 40 percent of global liquified natural gas (LNG), and 12 percent of the world’s fisheries, caught by 50 percent of all the fishing vessels globally. When it comes to trade, 30 percent of the world’s shipping trade flows through these waterways; that is around between $3-5 trillion worth of trade—or somewhere between the economies of India and Japan. Anything with the “Made in China” tag likely flows through this region.

This region services a market of 2.2 billion people, China’s 1.5 billion and around 650 million people in the region that the Association of Southeast Asian Nations (ASEAN) calls home. That itself is one-quarter of global humanity in just a single region.

The Militarization of the South China Sea

Fiery Cross Reef is one square mile in size and home to a military base with a 10,000-foot airstrip and a missile defense system, radar system, and about 200 troops. It’s not the fifteenth century, so China hasn’t just innocuously planted its flags and posted a watchtower there. Satellite images show that Fiery Cross Reef was established in 2016, but, strangely enough, it was just rocks and gravel two years before that; the base didn’t exist in 2014. This isn’t the only one either: there are five other military bases in the South China Sea—Cuarteron Reef, Mischief Reef, Subi Reef, Gaven Reef, Hughes Reef.

In 2014, satellite images showed that Chinese naval ships were collecting rock and gravel and consolidating various archipelagos in the South China Sea, building islands. And from this, they had seaports, naval bases, and islands. China says its outposts are not militaristic, but its actions say otherwise.

The Elephant in the Room is the Dragon

China’s grand strategy is having a vantage point and key assets in both the Pacific Ocean and the Indian Ocean, and the South China Sea is that crucial nexus in between. Presently, five countries in the ASEAN region lay claim to the South China Sea: Malaysia, Indonesia, Vietnam, Philippines, and Brunei. Taiwan also has its own claims.

As it stands, the United Nations Convention on Law of the Seas (UNCLOS) which first came about in 1973 (replacing Freedom of the Seas) was signed by over 150 countries, including China. It clearly states that a country’s territorial waters are within 12 nautical miles of its coast. Interestingly, the more important clause, particularly pertinent to the kerfuffle in the South China Sea, is that countries have an exclusive economic zone (EEZ) up to 200 natural miles off their shore. This includes free passage, access to all natural resources including, energy, fisheries, and, of course, trade routes. Any area that is outside the EEZ is deemed as international waters.

As China’s position on the world stage grew, so did its presence in the South China Sea. Even though China is a signatory to UNCLOS, it cleverly skirts around the issue of being a signatory by using the nine-dash line.

According to Kaplan, “The origins of the nine-dash line can be traced back to the official maps made by the Nationalist Kuomintang (also known as the Chinese Nationalist Party) government before and after World War II.” But some reports suggest that China has referenced fifteenth-century naval expedition maps and even asked cartographers in 1929 to demarcate the territory along the nine-dash line. If the partition of the subcontinent has taught us anything, drawing lines on the map can never end well.

With this nine-dash line, China is able to claim 1,800 km (or 1,100 miles) of territory, which is 90 percent of the waters. China’s claims emerged for those islands from 1907 to 1947, even as China’s internal turbulence saw the nationalists and communists dueling for supremacy, the world was being singed with both World Wars, and Imperial Japan was brutally laying its own claim to the region. Accuracy aside, from Beijing’s perspective, in some ways, there has always been a consistency to China’s claims, which even predates the founding of the United Nations and ergo predates UNCLOS.

From the turn of the twentieth century, there was always a colonial presence: Britain in the Malaya Peninsula (Malaysia and Singapore), the Dutch in Indonesia, France in Indochina (Vietnam), and Japan during its occupation during World War II. It became an emotional question for Beijing, where China wanted to stand up to the world and reclaim its civilizational glory, secure its fragile land and maritime borders, and assert its sovereignty in the South China Sea. But the turbulence increased further in between the 1960-70s when oil was discovered, increasing the region’s allure.

China’s claims have now taken on a life of their own. For China is not just claiming all the water, but the islands, the seabed, the resources in it, and the airspace above it too. And in 2013, Beijing added a tenth line—to include Taiwan.

The Spratly Islands are clustered in the heart of the South China Sea, and China wants to claim them to extend its EEZ all the way to the borders of Vietnam and the Philippines. This has now in the geopolitical lexicon come to be codified as the “cabbage strategy” (surrounding contested islands with as many ships as possible). In May 2013, China sent ships to Ayungin Shoal, and like wrapping leaves around a cabbage, surrounded the island. This created a blockade and precluded the Philippines from receiving food and other essential supplies. This struggle of surrounding islands with ships and building military bases is closer to the concept of Salami slicing—where China takes a series of smaller provocations beneath the threshold of war to attain a much larger strategic objective. But Beijing’s bellicosity doesn’t end there; In 2015, China declared anything above the South China Sea was now part of its air identification zone. No wonder that Steve Bannon, a hawkish former adviser to President Donald Trump, once said that a war in the South China Sea would be inevitable.

The militarization of the South China Sea is tempestuous, but it wouldn’t be a geopolitical conflict without U.S. involvement. While the United States lays no claim to the South China Sea, the region is central to Washington’s Pacific Command and Pacific fleet. Washington frequently sends its foremost naval assets like the USS Ronald Reagan into the waters. U.S. destroyers have come close to Subi Reef, irking Beijing, which sent out its own destroyer ship in response. The United States is committed to enforcing the idea of the Freedom of the Seas, and it sees this sacrosanct philosophy in peril in the South China Sea due to Chinese actions.

The Quadrilateral Security Dialogue (Quad), a strategic partnership between Japan, the United States, Australia, and India, has become a bulwark against Chinese aggression in the region. While it is not accurately described as an “Asian NATO,” it is clearly a pact with a focus on mutual security.

In the final days of its term, the Trump administration released a slew of measures against China, particularly with sanctions the over South China sea. Former Secretary of State Mike Pompeo turned up the heat on China when he said to ASEAN “Don’t let the Chinese communist parties walk all over us.” Pompeo added that the South China Sea is not China’s maritime empire and that Beijing “does not respect fundamental democratic values as those enshrined in the ASEAN charter.”

The Chinese navy’s expansion has become a concern for the United States and ASEAN nations. The Department of Defense has stated that China may be the first to attach anti-ship ballistic missiles, colloquially known as “carrier killers” in the South China Sea. Beijing has alluded to Barack Obama’s pivot to Asia as a clever ruse to lure the ASEAN member nations to turn against China—what Beijing sees as turning “friends” into foes.

The year 2008 was seminal for two reasons. One, of course, was the impending collapse of the financial system, because as America sneezed, the rest of the world caught the cold.

Second, the Beijing Olympics was a grand spectacle, not just for Michael Phelps’ aquatic prowess or Usain Bolt’s Cheetahesque pace, but it was China’s announcement to the world that Beijing was ready to dictate the twenty-first century’s economic growth.

After Xi Jinping arrived on the scene in 2012, there have been fundamental differences in how China approaches its foreign policy and economic objectives. From Deng Xiaoping to Xi Jinping, China moved from a “peaceful china rise” behind the scenes into adopting a new sense of bellicosity, one where its diplomats embrace a wolf-warrior style assertive diplomacy.