South China Sea: The U.S. Navy Is Back (with an Aircraft Carrier) 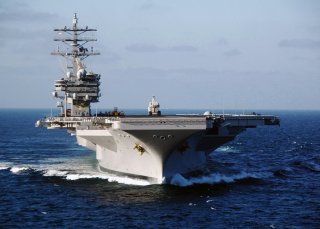 Last Monday, after operating in the Indian Ocean, the strike group passed through the Strait of Malacca and entered the South China Sea. It is now conducting maritime security operations that include flight operations with both fixed and rotary aircraft and is also taking part in maritime strike exercises along with coordinated tactical training between surface and air units the U.S. Navy’s press office reported.

“Throughout our deployment, we continue our long tradition demonstrating the United States’ commitment to the lawful use of the seas and maintaining open access to the international commons,” said Rear Adm. George Wikoff, commander, Ronald Reagan Carrier Strike Group. “The focus of our operations has always been, and will continue to be, cooperation alongside our Indo-Pacific allies and partners in promoting regional stability.”

The U.S. Navy also stated that the Ronald Reagan Carrier Strike Group is forward-deployed to the U.S. Seventh Fleet area of operations in support of a free and open Indo-Pacific region. The fleet regularly interacts with thirty-five other maritime nations to build partnerships that foster maritime security, promote stability and prevent conflict.

CSG-5 had last operated in the South China Sea in August when the USS Ronald Reagan took part in the U.S. Navy’s twenty-seventh Rim of the Pacific exercises. Despite the ongoing novel coronavirus pandemic, it was the largest maritime exercise and one that was designed to foster and sustain cooperative relationships with partner nations.

On CSG-5’s previous visit to the region, the Chinese military urged Washington to “stop its provocative military acts,” and Beijing even accused the U.S. Navy of trying to “drive a wedge between the two countries in the region.”

China has made it very clear that the South China Sea is one of its core interests the South China Morning Post reported and one that it would readily defend. The United States has also stressed that it would stand by its partners in Maritime Southeast Asia including the Philippines, with which it is co-signed a 1951 Mutual Defense Treaty.

Washington has taken a hard line on China’s expansion in the South China Sea, and in July denounced Beijing’s “illegal” claims, and backed a 2016 international tribunal that ruled that most of the claims have no legal basis. For its part, Beijing has vowed to ignore the verdict.

The Gipper is Back

The Nimitz-class USS Ronald Reagan had departed its homeport of Yokosuka, Japan and began a CSG patrol in the region at the end of June. She is the ninth ship of the class and is named to honor Ronald W. Reagan, the fortieth President of the United States (1981–1989). She was the first to named in honor of a then-living former President. While Reagan was not associated with the navy, one of his key initiatives while in office was the six-hundred-ship Navy program.

Commissioned in July 2003, the ship’s nickname is “Gipper” and her motto is “Peace Through Strength.”