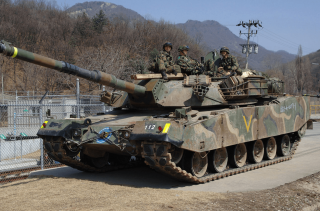 Earlier this month the South Korean Ministry of National Defense (MND) announced plans to further improve the performance of the Republic of Korea Army’s (RoKA’s) K1A2 main battle tanks (MBT), as part of the latest upgrade program. The K1A2 is essentially an “advanced version” of the K1A1 and features many improvements including the latest in South Korean Battlefield Management and C4I networking technology. Those updates and improvements of the domestically-built tank began in 2014 and had been scheduled to continue until 2026.

Jane’s reported that the South Korean Defense Agency for Technology and Quality (DATQ) will conduct “advanced research” between June and October of this year to determine how best to further enhance a number of the K1A2’s performance. This will include the installation of a situational awareness system to allow the tank’s four man crew to better monitor the battlefield situation from within the vehicle. In addition, the driver is expected to have a better view with a thermal periscope upgrade.

Other upgrades under consideration include new high-performance special armor as well as an active defense system that is capable of intercepting anti-tank missions. Additionally, there will be a remote weapon station—which could allow for the commander to engage some targets independently of the gunner—and a modern environmental control system that could provide protection for the crew from chemical, biological and radiological (CBR) threats.

The tank’s engine is also expected to undergo an upgrade, while the existing hydro-pneumatic suspension is likely to be replaced with an in-arm suspension unit to improve maneuverability. There already is a timeline for when these upgrades would occur, but it is unclear at press time how the nation’s recovery from the COVID-19 outbreak could impact these efforts.

RoKA currently operates around 480 K1A2 MBTs, and these were built by Hyundai Rotem, and these are armed with a 120mm, KM256 Smoothbore (L44) along with a coaxial 7.62mm machine, and a 7.62mm MG and .50-caliber MG on the top of the turret. It has a maximum rate of fire of ten rounds per minute and can shoot the Korean Smart Top-Attack Munition—a top-attack fire-and-forget projectile that is fitted with its own guidance system.

These tanks highlight the great strides made by South Korea to build up its arms industry. The nation’s foreign policy has focused largely on deterring acts of aggression by North Korea for nearly seven decades, which is completely understandable given the two nations are still technically at war—though an armistice halted the fighting in 1953.

In recent years South Korea has also worked to turn its large domestic defense industry into an export powerhouse, and the K1 program was part of that effort. However, at the present time the tank South Korea’s Army remains the only operator of the upgraded K1A2.